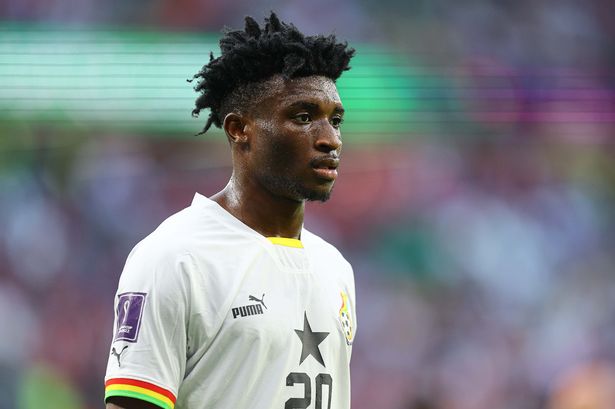 Former Ghana coach Kwasi Appiah says the Ghana Football Association told him he would be sacked after he handed call-ups to Mohammed Kudus and some other youngsters to the national team.

Appiah spotted a young Kudus during his days with FC Nordsjaelland and handed him a chance to play for the Black Stars despite his young age.

However, he has revealed there were so many threats to his job from management committee members for his decision to bring in youngsters as Ghana faced South Africa in an Africa Cup of Nations qualifier.

“Not only [Mohammed] Kudus but some other young players. There were people who felt the young players didn’t deserve the Black Stars call-up. But for me, I had watched them and I believed them. I always told my players don’t prove to me, prove to Ghanaians. If you do well that’s for your own good.

“My job was on the line because I was warned that if I lost the match I will be sacked. I didn’t mind because I knew I was doing what was good for the country,” Coach Kwesi Appiah shared in an interview with Dan Kwaku Yeboah TV.

Kudus went on to score on his debut as Ghana beat South Africa with a 2-0 score.

The AFC Ajax Amsterdam star Kudus Mohammed became the first ever player to score a brace for Ghana’s Black Stars in FIFA World Cup history since Ghana’s debut in 2006 in Germany.

The Dutch-based left-footed playmaker wrote his name into the history books of Ghana when he scored two goals against the Taegeuk Warriors of South Korea on Monday afternoon at the Education City Stadium in Al Wakrah.

Kudus scored the third goal of the match to put Ghana 2-0 up before the half time whistle with a very clever header from Crystal Palace FC forward Jordan Ayew.

The 21-year-old Ghanaian attacking midfielder also added his second goal of the match in the second half after the Koreans had equalized with a calm finish to give Ghana their first win in six games at the World Cup since the win of United States of America in 2010 in South Africa.

Before his brace, no Ghana International had ever achieved that feet at the World stage for the Black Stars despite having players like Asamoah Gyan, Sulley Muntari, Michael Essien, Stephen Appiah amongst others playing at the Mundial.

He inked his name into the history books of Ghana after his two goals against the Asian powerhouse and would be hoping for more at the World Cup as Ghana plays Uruguay on Friday, December 2.