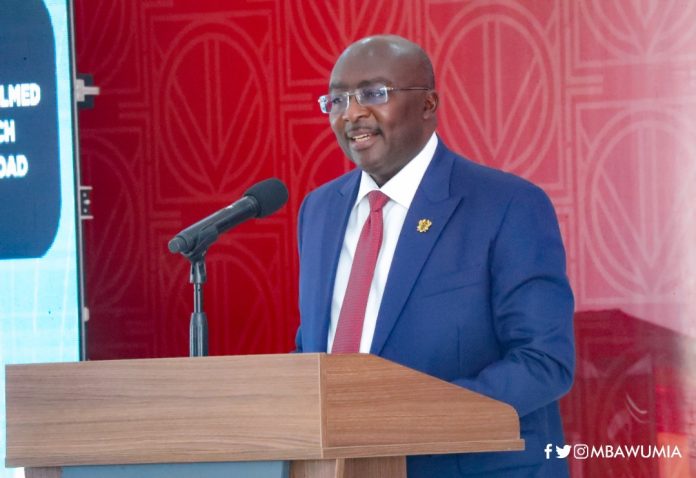 Vice President Dr Mahamudu Bawumia has noted that Ghana has been hit by a quadruple whammy in the last few years resulting in the country’s quest to seek support from the International Monetary Fund (IMF).

Dr Bawumia said the country will not be going to the IMF for support had it not been for the fiscal impact of this quadruple whammy.

He indicated that the energy sector excess capacity payments, the banking sector clean-up, COVID-19 and the Russia- Ukraine war are events that has pushed the country to seek the support of the Bretton Woods institution.

Speaking at the Accra Business School on Thursday (14 July), under the theme: ‘The Role of Information Technology Education in the Government’s Digitalisation Agenda’ Dr Bawumia said, the excess capacity payments of GHC 17 billion relate to a legacy of take or pay contracts that saddled the country’s economy with annual excess capacity charges of close to US$1 billion.

Dr Bawumia said these were basically contracts to supply energy to Ghana in excess of Ghana’s requirements, but we were obligated to pay for the power whether the country uses it or not.

The excess capacity payments, he indicated, includes GHC 7 billion of payments for gas resulting from the previous government signing an offtake agreement for a fixed quantity of gas with ENI Sankofa on a take or pay basis which was way in excess of what was needed at the time.

“Not keeping up with the excess capacity payments would have meant throwing the country back into a new bout of dumsor.”

Bawumia said the country was also confronted with a banking crisis as a result of the mismanagement of the banking sector.

He said Ghana’s banking system was on the verge of collapse and not dealing decisively with it would have meant disaster for the economy with millions of people losing their savings.

He indicated that the three items of expenditure cumulatively amounted to GHC 54.0 billion (the equivalent of some US$7.0 billion), which was borrowed.

“The Ministry of Finance estimates that the interest payment on this borrowing for the three items amounts to GHC 8.5 billion annually. This is some 23% of Ghana’s annual interest payments of GHC 37 billion,” he said.

“It should be noted that without the GHC 54.0 billion debt for the three exceptional items (COVID-19, Financial Sector and Energy), Ghana’s debt to GDP would be within the sustainability threshold of some 68% instead of the 76.6% at the end of 2021.”

“If you take out the fiscal impact of this quadruple whammy, Ghana will not be going to the IMF for support because our fiscal, debt and balance of payments outlook would be sustainable.

“Of the four factors, two (COVID-19 and the Russia Ukraine war) were external and the other two (the banking sector clean up and the excess capacity payments) were the result of policies of the previous government.”
Way forward
On the way forward for the country Vice-President Bawumia said, Unfortunately, judging from where we are today, there is no end in sight for the Russia-Ukraine war. While we hope for a quick end to the war, we must understand that things could get worse before they get better.

He said the major lesson of the last two years is that “we have to be more self-reliant as a country. It is important that we take decisions that will inure to the benefit of the country regardless of whether we are going to the IMF for a program or not.”

According Dr Bawumiathe immediate task for the country is to restore fiscal and debt sustainability – through revenue and expenditure measures and structural reforms, adding that “non-concessional borrowing should be curtailed to enhance debt sustainability.

Prince Charles recovers from coronavirus and is out of self-isolation