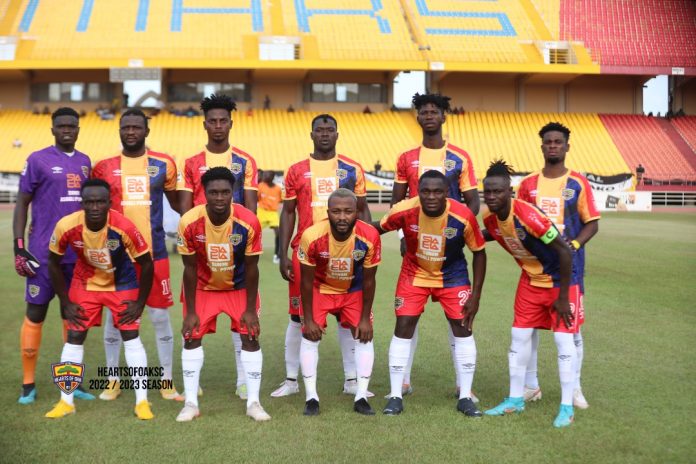 The Lions fell flat under the Oak Tree in the week seven in the Ghana top-flight despite having a numerical advantage early in the game when Awako was red carded.

The 10-man Phobians beat the Lions to move up on the league table after seven games into the Ghana top-flight season.

Lions had greater share of possession in the early exchanges of the match but failed to make it count against the inconsistent Phobians.

Hearts of Oak SC scored first through a stupendous pile driver from his weaker foot from outside the box into the top right corner to give the Phobians a deserving lead.

The Phobians captain was shown the red card after dissent few minutes after his goal, becoming a villain just a moments of producing pure magic. Hearts got a clear goal goal scored by Eric Esso chalked off.

The Rainbow Boys scored the second through a spot kick in the second half when Ibrahim Salifu stepped to burry the ball home to make it 2-0.

Ten minutes to end proceedings, Basit Seidu halfed the deficit to one with a free header inside the box following a corner kick.

Benjamin Yorke made it 3-1 to Hearts into additional time period with a tame effort which the goalkeeper failed to grab.

Hearts of Oak have gone six matches without a defeat after losing to Aduana Stars FC in the first game of the season with three wins and three draws.

The Rainbow Boys will face Dreams FC in their next game at the Accra Sports Stadium.

Lions lost their first game of the season to Kotoku Royals and went on a five games winning streak before today’s defeat to the MTN FA Cup winners.

Lions will face Kumasi King Faisal FC in their next game at the Baba Yara Sports Stadium in Kumasi on Sunday afternoon.