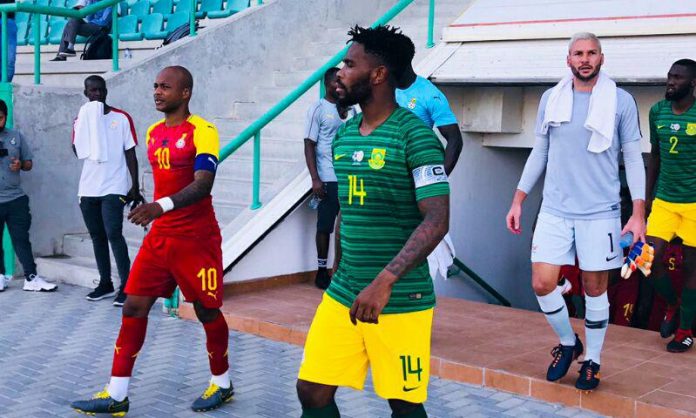 Of the eight games Ghana won in qualifying for a maiden Fifa World Cup, two — coming a full year apart — proved most defining.

The opponents on both occasions?
South Africa.

Ever since its re-admission into international football in the early nineties, the Bafana Bafana had proven no easy opposition for the Black Stars. In five meetings from 1994 to 2002, Ghana never won against South Africa, losing thrice. Reasonably, then, the prospect of facing the old bully — along with four other teams in Group 2 — in the race to reach Germany 2006 appeared to deflate the hopes of many a Ghanaian, but that needn’t have been the case.

Ghana won the first game at home 3-0, pulling off a 2-0 triumph in Johannesburg a dozen months later; if the former felt like a coming-of-age performance, the latter – far bolder and more daring — saw the West Africans turn a corner. Those results themselves didn’t secure the Stars’ ticket to the finals, but, to the Ghanaian spirit, they were a real boost — and the hitherto underachieving national team wasn’t the same anymore.

Having overcome a bogey side, there didn’t seem an opponent too strong for the Stars to compete fairly against, or even beat, and it is that wave of confidence Ghana rode for the next few years until that run came crashing not too long ago. These days, Ghanaians no longer feel so positive about the Stars, following recent struggles, and the team itself isn’t experiencing too many good vibes. There is the need for a fresh spark, which the new Ghana Football Association regime seeks to ignite with a strong, fresh start.

The South Africans are back in town, presenting a fine opportunity for Ghana to re-set and re-launch. The hosts have been idle since suffering another disappointing Africa Cup of Nations outing earlier this year, while South Africa have already taken in a friendly against Mali that was won.

And with Ghana head coach Kwesi Appiah ringing a number of changes to his squad for the November 14 clash in Cape Coast, Ghana would be a different team from the one South Africa trainer Molefi Ntseki — then as assistant to Stuart Baxter — played in an Afcon 2019 preparatory fixture. Ntseki, however, chooses to focus more on his opposite number himself ahead of the two countries’ first competitive contest in four years.

“In terms of our analysis and profiling of Ghana, we played them in Dubai [before the 2019 Afcon] and there is not much of a change in their playing personnel,” Ntseki was quoted as saying by Sowetan Live.

“The coach [Kwesi] Appiah if he stays we have seen him and analysed him. Analysing is not only about the players you should also do the coach to see what he prefers. We are still getting more clips so that we go to the match with confidence.”

Appiah, on the other hand, is counting on a luxury that has been in such short supply in recent months.

“I believe this is the only team we have as Ghanaians and we need to protect and support it together,” Appiah appealed this week. “I believe that if we really want to bring back the love as we all want then a lot will depend on the media.”

Come Thursday, we will see just how much love – and, more importantly, how many points — Ghana gets at the start of a quest to reach a ninth successive Nations Cup tournament.

CHALE WOTE 2019: Some of the Best Images