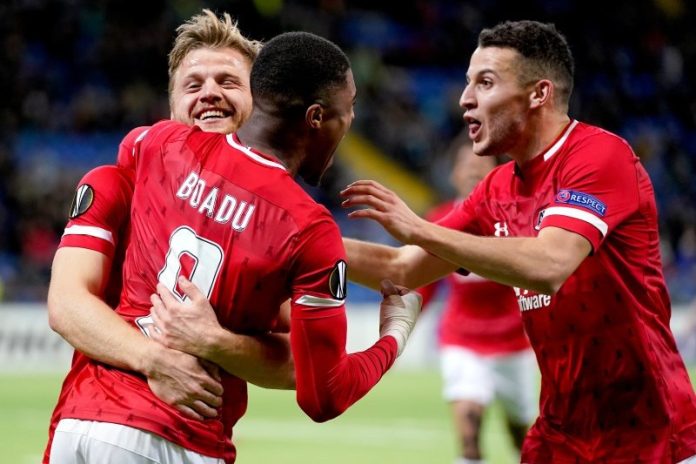 The 18-year-old young and enterprising attacker broke the deadlock in AZ Alkmaar’s Europa League victory in Kazakhstan over FC Astana to send them on top of their group temporarily ahead of English side Manchester United.

Dani de Wit provided the vital touch to set up the Ghanaian who shrugged off the opposing defender to convert in the 29th minutes of the game to put the away side ahead.

The first half ended 1-0 in the away team’s favour.

The Dutch Eredivisie side doubled their lead seven minutes into the second half with Dani de Wit providing his second assist of the game this time setting up midfielder Fredrik Midtsjo, who finished in style to make it 2-0 for the Red and Whites.

The dynamic Ghanaian-born Dutch attacker gave an assist in the 57th minutes to ousamma Iddrisi to make it 3-0.

The away team took full control of the game after the third goal and Pentelis Hatzidiakos added the fourth goal with 14 minutes left to play.

Boadu grabbed his second of the game a minute after the fourth goal to register a deserved brace and assist which earned him the man-of-the-match accolade.

AZ Alkmaar won the game by a 5-0 scoreline.

C/R: Disquiet among officers as DCE leads attack on policeman