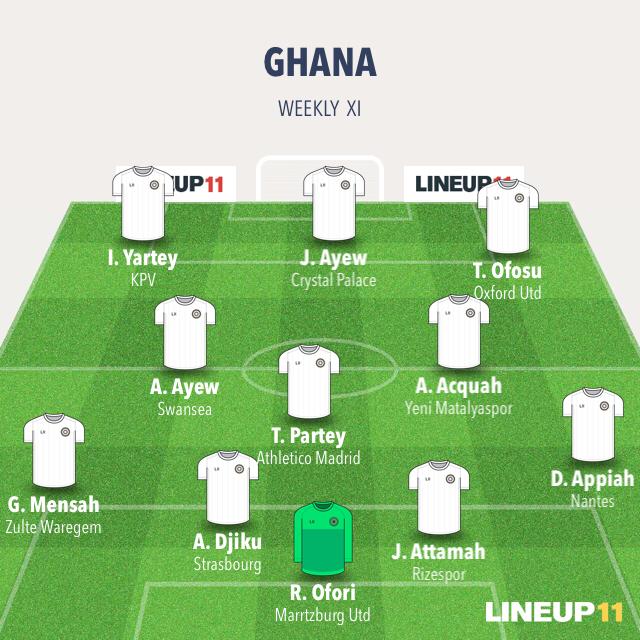 It was a good weekend for Ghanaian players abroad with several top performances. Dailymailgh.com brings to you our team of the week – October 1-6.

The Ghanaian keeper was the hero of the day as Maritzburg United defeated Baroka by a lone goal to nothing in the ABSA Premier League. He pulled some stupendous saves which kept his side in the game

The left-back put up an outstanding performance for Zulte Waregem as they gave Cercle Brugge a 6-0 mauling. He bombed forward on countless occasions and defended well throughout the game.

Despite Strassbourg losing 1-0 to Dijon, the gangling central defender was one of the top performers on the pitch with some quality defending.

The Ghanaian was resolute in the heart of defence for Rizespor in their 2-1 defeat to Trabzonspor, he was very solid in the centre of defence and also pushed forward in some instances.

The tough tackling holding midfielder sat in front of the back four and did all the job as Yeni Matalyaspor hammered Denizilspor 5-1.

After a fantastic output in midweek in which he scored against Locomotive Moscow in the Champions League, the central midfielder was in his elements again against Real Valladolid in the domestic league. He was very influential as his club drew goalless in the away game.

Ayew scored for the second successive time in the league for Swansea when they lost 2-1 to Stoke City. He opened the scoring under one minute and had a great game.

The right winger was on target for Oxford United in their 2-2 away draw with Accrington Stanley. Fosu tormented the Stanley full backs through out the game.

Ayew stunned West Ham at the London Stadium with an 87th minute winner in the fierce encounter. The Ghanaian who is warming himself into the hearts of Crystal Palace fans was one of the best players on the field as they won by two goals to one in the London derby.

Yartey continued to take the Finnish topflight by storm as he put up another catchy performance. He netted the first goal for KPV as they went away to wallop Lahti by four goals to one.

How a coffee company turns used pods into bicycles for schoolgirls...