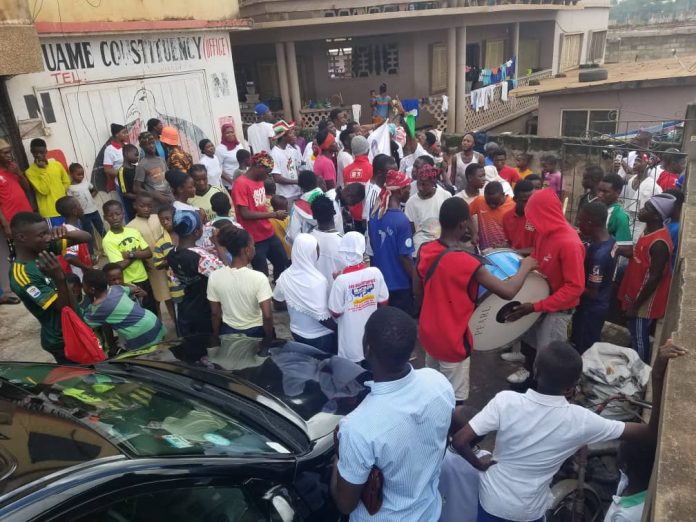 Some supporters of the opposition National Democratic Congress (NDC) in Suame in the Ashanti Region besieged the constituency office to protest against executives after their preferred aspirant was disqualified to contest the upcoming parliamentary primaries.

The aspirant, Emmanuel Boahen, was disqualified early last week by the Alban Bagbin vetting committee after questions were raised about his eligibility to contest on the ticket of the NDC at the ruling party’s stronghold.

The development also means that his main contender, Francis Dodovi, has been cleared to contest the incumbent New Patriotic Party MP and Majority Leader, Osei Kyei Mensah Bonsu—who has been reigning for over a decade.

Wielding placards with various inscriptions the supporters of Boahen who are unhappy with the decision marched through the streets of Suame, describing the decision as discriminatory.

One of the supporters is Peprah Isaac— NDC branch chairman for Osei Kwadwo ‘B’ electoral area at Suame.

He describes the decision as unhealthy and could jeopardize the party’s chances ahead of the 2020 elections.

“I know Emmanuel. I even registered him at my branch and secured him a party card. This is undemocratic and politically suicidal for the party,” Mr Peprah told DailyMailgh.com adding that, “we won’t allow Dodovi to go unopposed”.

The aggrieved supporters also marched to the Suame Constitutency office to formally petition the rank and file of the party to reverse the decision.

They have, however, warned that they would unleash a series of actions to get their aspirant on the ballot if the party does not resolve their grievances after a week.

NDC Chairman for Suame, Seeba Mohammed Zeeba, who received the petition on behalf of the party assured that the document would be forwarded to the appropriate quarters for further action.

“I know Emma very well. He is a member of the party. He is an active member of the party…so the petition would be forwarded to the appropriate quarters and their grievances would be heard”, said Mr Seeba—who appeared not surprised over the development.