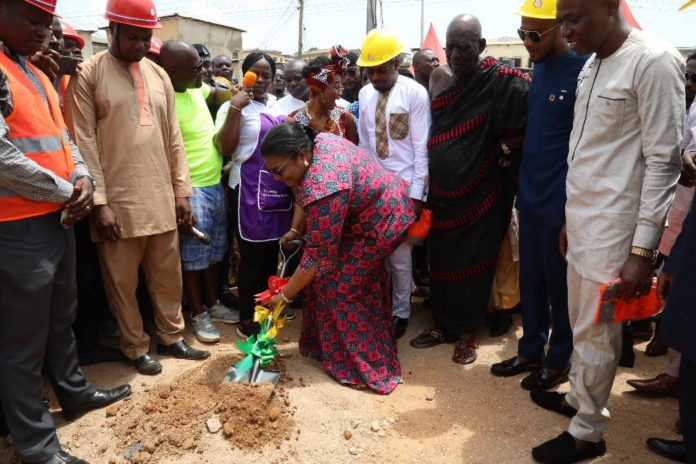 The First Lady of Ghana Mrs. Rebecca Naa Okaikor Akufo-Addo on Tuesday cut the sod for the construction of the new Anafo Market in Cape Coast in the Central Region.

The project which is being undertaken by the Coastal Development Authority (CoDA) as part of President Akufo-Addo’s One Million Dollars ($1,000,000.00) per constituency campaign promise follows a needs assessment undertaken by the Authority through the Cape Coast Municipal Assembly, which ascertained a market as one of the most pressing needs of the Chiefs and people of the area.

The new Anafo Market which will consist of over two hundred and sixty (260) stalls, restaurants and nurseries will be completed in twelve (12) months and is expected to benefit traders and fish sellers in the community.

In a brief speech, Mrs. Akufo-Addo who was in Cape Coast to engage with and empower women as part of activities marking International Women’s Month, commended CoDA for heeding to a need of the community which will go a long way to economically empower women, emphasising that as primary caregivers in most families women need adequate resources and opportunities so they can provide for their families.

“When women have money their children are better fed, better cared for and do relatively well in life”, she said.

She expressed the hope of the market being completed on schedule to enable women and traders in the community enjoy its benefit.

On his part Chief Executive Officer of CoDA, Jerry Ahmed Esq. assured the people of his outfit’s determination to address their developmental needs in accordance with the Authority’s mandate adding that since its establishment, CoDA had procured one thousand three hundred (1,300) outboard motors to support fishermen and established the CoDA Credit Union to provide micro-credit facilities to small scale informal businesses.

Earlier on Mrs. Akufo-Addo through The Rebecca Foundation of which she is founder, presented start up working kits to fifty (50) women from Assin Fosu who with the assistance of the National Board for Small Scale Industries(NBSSI) had been trained in soap making.