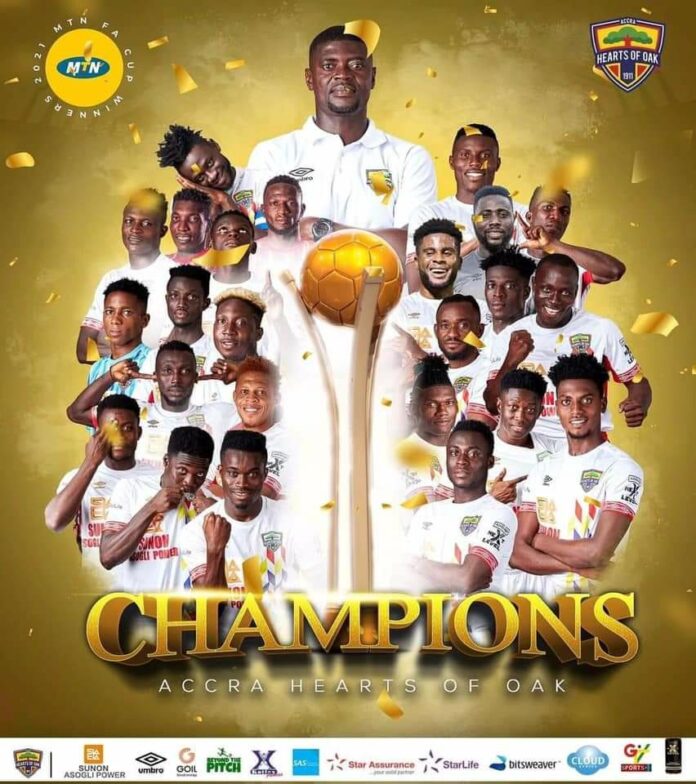 Accra Hearts of Oak SC defeated Obuasi Ashantigold SC 8-7 on penalties after a 0-0 stalemate to win the 2020-21 MTN FA CUP Competition in Accra on Sunday night.

The Miners shot stopper skied, Kofi Mensah his kick after Richard Attah has converted his with a bullet earlier right after saving Seth Osei’s kick which would have been the winner.

The Obuasi-based club were the better side in the entire duration of the match and gave the Phobians a torrid time throughout the match.

Ashantigold came up with their first attacking move Mark Agyekum was teed up by Eric Esso but the winger slipped horribly inside the box, allowing Hearts to clear their lines.

The Phobians gained control of the match and Benjamin Afutu delivered a sumptuous header on a corner kick which came off the crossbar but defender Kwadwo Amoako was close to the goal line to kick it out.

AshantiGold continued to play to their strength and Amos Addai went on a solo run before striking at goal but it was straight and direct for goalkeeper Richard Attah who made a required simple save to keep his team in the game.

After that earlier chance by the Miners, the Rainbow Boys also replied with a swift counter attacking football but Isaac Mensah was mistakenly flagged offside.

Few minutes later, a deflection on a pile driver by Ovouka from long range nearly slipped through the hands of Mensah but he recovered to collect it on the touchline.

Afutu was picked out neatly by a Fatawu Mohammed cross from the right but the midfielder’s header was not one of his best as his effort at the far post went wide.

Seth Osei blasted wide from close range after a brilliant tackle from Robert Addo Sowah was was redirected by Mohammed Alhassan and Isaac Agyemang decided set up the diminutive midfielder.

There was no winner in regulation time after Daniel Barnieh swept his shot at goal wide in the last kick of the match.

Before the end of the first 15 minutes, AshantiGold went on a break with Yaw Annor but his final pass to Osei was flagged offside as the latter was way ahead of the defenders of Hearts.

Maybe Hearts should have been awarded a penalty when Emmanuel Nettey was fouled inside the box but referee Daniel Laryea thought it was a fair challenge and waved play to continue to the surprise of the player and the fans alike.

The game headed to penalty shootouts after a goalless end to end match.

Hearts of Oak goal, Richard Attah saved Ashantigold’s first kick to hand the Phobians an early advantage but Caleb Ekuban missed the third kick to make as well as Afriyie Barnieh to make it 3-3 after the first kicks.

Ashantigold had the chance to score and win it with their 10th kick but Seth Osei’s effort was saved by goalie, Attah who then blasted his shot into the roof.

Kofi Mensah, Ashantigold SC goalkeeper blasted his ball way over the bar as they Phobians emerged 8-7 victors to clinch their second trophy of the campaign to bag the double.

Hearts 1-4 RTU: ‘Phobians dragged through the mud in Accra’