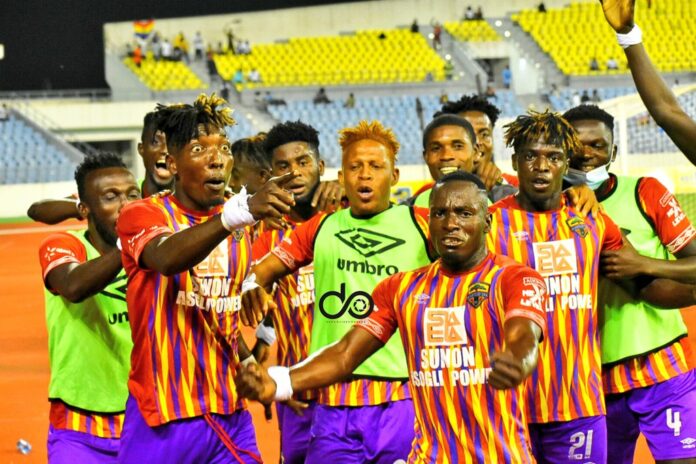 The Rainbow Boys beat the Yellow and Mauves with an emphatic and comprehensive 3-0 victory to book their place in the 2020-21 FA Cup Competition come next Sunday against Obuasi Ashantigold SC.

Midfielder Benjamin Afutu opened the scoring for his team with a towering header in the 12th minute following a cross from Isaac Mensah from the right side of the Medeama area.

Five months after taking over the coaching role at the Phobian club, Samuel Boadu has the opportunity to finish his first season at Hearts of Oak with two trophies. The former Medeama trainer led the Phobians to the 2020/21 Ghana Premier League title and is in the final of the Cup competition on top of that.

Hearts of Oak were largely the better side of the first half as they caused too much troubles for their opponents who proved inferior against the Continental Club Masters once again following a 2-0 loss they suffered in a Ghana Premier League match in Accra.

Medeama goalkeeper Frank Boateng let his team down  as his 58th minute blunder resulted in the second goal of the game for the Phobians with striker Mensah directing the ball into an empty net. The goalkeeper had come out of his area to clear a danger but he shockingly missed the ball only for Isaac Mensah to make it 2-0.

In the 68th minute Boateng made another mistake that led to the third goal of the Ghanaian champions as he brought down Afriyie Barnie in the box and immediately referee Selorm Yao Bless pointed to the spot.

Barnie initially saw his kick saved by the Medeama goalkeeper but the referee ordered a retake as Boateng had completely moved off his goal line before the penalty kick was taken and for the second time he made no mistake.

Yaw Preko brought on striker Prince Opoku Agyemang for Tetteh Zutah in the 64th minute but that was still not enough for the Yellow and Mauves to bounce back from the heavy 3-0 reverse.

Hearts of Oak take on Asantigold SC  in the grande finale. The Miners imposed a comfortable 4-1 win against Berekum Chelsea to set reach their first Cup final since 2012.