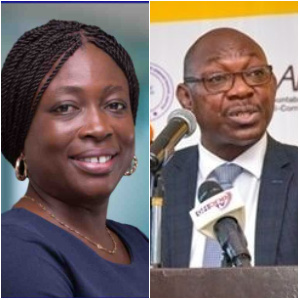 The credibility of a test result on Lithovit liquid fertiliser conducted by the Chemistry Department of the University of Ghana, is in serious doubt as various witnesses question the result.

Those who have challenged the integrity of that report include the former board chairman of COCOBOD and head of it’s Entity Tender Committee, a former District Cocoa Officer of Cocoa Health and Extension Division of COCOBOD as well as farmers who have used and testified about the efficacy of the same Lithovit liquid fertiliser.

Interestingly, the test report marked as Exhibit H, in the ongoing trial of former COCOBOD boss and two others, was discredited by the prosecution witness, whom the report was tendered through by the state, when he came under cross-examination.

Dr. Emmanuel Yaw Osei-Twum who claimed to have worked on that Lithovit Fertiliser impugned the credibility of the report when he noted in court that the report which was tendered in evidence by the prosecution was “doctored”.

But in his ruling on the submission of no case on May 7, 2021, the trial judge, Justice Clemence Jackson Honyenuga made copious reference to the disputed test report in arriving at a decision to dismiss the application by the accused persons.

He for instance wrote on page 59 that Lithovit liquid fertilizer which COCOBOD bought between 2014 and 2016, per the test result of the University Ghana Chemistry Department “is worthless. It is a fact that the state is the owner of those monies paid out and her coffers were depleted without receiving any value for its money.”

However, Justice Honyenuga conveniently, in his closet, excluded from his ruling as many as 18 evidence including a report by the Ghana Standard Authority which proved the value and potency of Lithovit liquid fertiliser and tendered through the CID investigator which lawyers say exonerate the Accused.

When the content of that test result was relayed to Ambassador Daniel Ohene Agyekum, the board chairman whose term Lithovit was bought, during cross-examination in June, this is what he said:

“If you conduct a scientific test in the classroom and you draw the conclusion such as was drawn by the university, then I will state that it was not certainly the same Lithovit liquid fertiliser that the board had purchased and provided to the farmers free of charge.”

Giving his evidence in chief on June 29, a subpoenaed witness, Samuel Tsatsu Adigler, whole retired from COCOBOD in 2019 as a District Cocoa Officer recounted how effective Lithovit liquid fertiliser was.
This, he said, is based on his personal experience on the field, visiting farms as well as interacting with farmers.

Lawyer Samuel Codjoe, counsel for Dr. Stephen Opuni, asked the witness about his view on the report based on the test conducted at the University of Ghana.

The witness remarked: “My Lord, I will like to say that I was not there before this sample was tested but upon my own observation about the farms sprayed with Lithovit, testimonies from farmers who used Lithovit on their farms and the report from my CHED management team in 2015, I can confidently say that this was not the Lithovit COCOBOD supplied to us that was tested.”

He was also asked, “What would you say to the prosecution’s case that even though the sum of 65 million, 200,000 dollars was spent on the purchase of Lithovit, there was no significant increase in cocoa yield in Ghana.”

Mr. Adigler replied, “My Lord, farmers have testified to us that the use of Lithovit fertiliser has increased their yields, improved their income and enhanced their livelihood and therefore if somebody knows the need of farmers and then give them the right input like Lithovit to bring changes in their life, I see no reason why such a person who is a saviour to them should be charged as such.”

He was also asked what he makes of the prosecution’s case that purchasing Lithovit caused financial loss to the state in that it had no benefit to the state.

“I think I answered this question earlier that farmers have testified when they used the Lithovit, it increased their yields and therefore increased their income from the cocoa harvest and have changed their livelihood of which some of them said they were able to buy vehicles and put up buildings in that period. Therefore it can’t be said that the purchase of Lithovit by COCOBOD was useless.”

Also under cross-examination led by counsel for Seidu Agongo, lawyer Nutifafa Nutsukpui, a Berekum-based cocoa farmer, Mr. Amo Amankwaa was asked about his reaction based on his “personal experience of using Lithovit liquid fertiliser for two cocoa seasons”.

Meanwhile, another cocoa farmer based in Assin Fosu,
Mr. Samuel Torbi, who is the chairman of Cocoa Cooperative in Assin Fosu in the Central Region with over 33 acres of cocoa farm, has been testifying about the efficacy of the Lithovit liquid fertilizer, a product he called “messiah”, which application he said helped him to double his cocoa beans. He also showed evidence of how his production declined during seasons that he applied other fertilisers.

Although the state closed its case last year calling seven witnesses, none was a farmer, as the end user, to testify to the efficacy or otherwise of Lithovit liquid fertilizer, which is at the center of the trial, after it was applied on their farms.

The former COCOBOD Chief Executive Dr Stephen Opuni and businessman Seidu Agongo have been accused of, among others, causing financial loss to the state. It is the case of the prosecution that Lithovit liquid fertilizer purchased under the tenure of Dr. Opuni between 2014 and 2016 was a waste of resources, because the state did not get value for money.