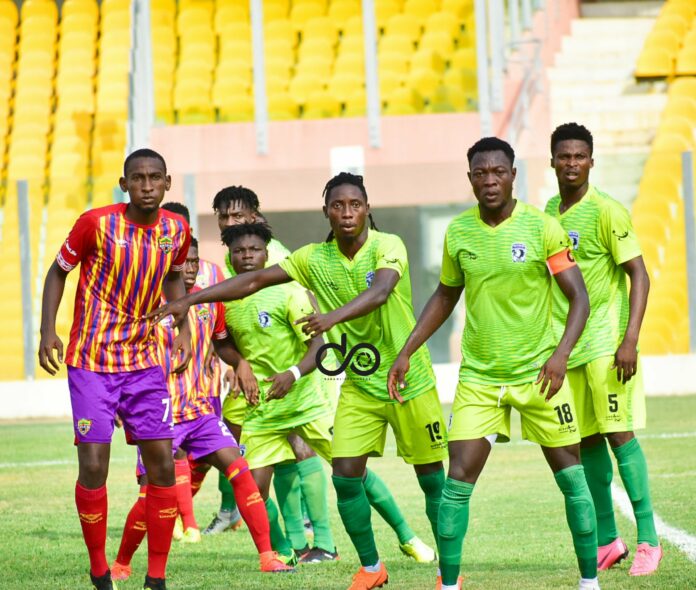 Hearts of Oak demolished Bechem United in the week seven of the Ghana Premier League in Accra on Saturday.

The Phobians were undoubtedly the best side of the opening half and created some decent chances in the game but failed to punish the visitors.

Black Satellites captain, Afriyie Barnieh had a glorious chance inside the box to find the back of the net or set up his strike partner Victor Aidoo to connect to a yawning net but decided to go solo and wasted the begging opportunity to score.

Bechem United were reduced to 10-men late in the half after their defender Emmanuel Asante was sent off for dissent.

After the break, the Phobians made their one man advantage count as the piled an enormous amount of pressure on the the visitors.

Seven minutes into the second half, Umar Manaf broke the deadlock of the match to put the hosts 1-0 up on the 52nd minutes with a scintillating strike.

Striker Víctor Aidoo grabbed a quick brace to make put the Rainbow Boys in a 3-0 lead scored on the 68th and 73rd minutes respectively.

Hearts were awarded a penalty in the closing stages of the match and it was converted by Frederick Ansah Botchway to put the hosts in a 4-0 lead.

Mamane Lawali added the icing on the cake when he went past the goalkeeper to slot the ball into an empty net on the 88th minute to make it 5-0 for the Hearts of Oak.

Benjamin Afutu scored the sixth goal for Hearts as Prince Adu Kwabena scored a consolation for the visitors to make the final score 6-1 in favour of the Rainbow Boys.