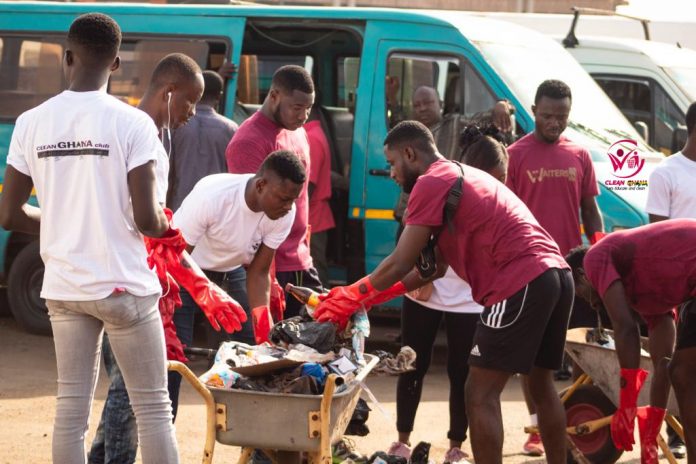 Hope Clean Ghana formerly known as Clean Ghana, a Non-governmental organization on Friday undertook a cleanup exercise to rid the Kaneshie market and its environs of filth and to encourage a healthy lifestyle.

The cleanup which was led by Mr Prince Asiedu, Founder and President of the group saw support from Rel event, Waiters99, Zoomlion Ghana Limited among other members.

The second cleanup exercise of the group was combined with educational talks to help bring an end to filth as well as sensitize residents on the need to change their attitude towards the environment.

The exercise saw residents converging early at the Kaneshie street, car parks, Kaneshie police station and the market place to fully participate in the clean-up.

Mountains of waste from the various households within the sub-metro, as well as the waste from trading activities in the market were evacuated.

Large deposits of sand around street corners and in gutters, which had silted the openings of gutters preventing rainwater from flowing easily after rains, were also cleared.

Choked gutters which made it difficult for free water in and around the market were cleared with the support of some members of the community who freely joined in the exercise.

Speaking to the media during the exercise, Mr Prince disclosed that the essence of the clean-up was to rejuvenate the sense of communal labour which had been abandoned by Ghanaians.

”The President of the Republic of Ghana (Nana Addo) has established and revamped a lot of fine authorities, ministries, agencies and institutions to combat the canker confronting sanitation but they are sleeping on their jobs” adding that, ”I don’t know why Sanitation officers are employed in this country and paid with tax payers money yet they don’t work but sit in the office.”

The exercise, he explained was also to help promote environmental hygiene, which according to him would promote good health among the citizenry.

He further called on leaders in other areas to bring their citizens together to improve the sanitation situation within their localities.

According to him, such initiatives will contribute towards the realization of the Sustainable Development Goal (SDG) 6; which focuses on good sanitation and quality water system by end of 2030.

“You will reduce poverty when you enhance sanitation, because at the end of the day, disease like malaria will be reduced and we will have fresh air to breath, so it is important we keep our environment clean, and this is also to support the Presidents vision of making Accra the cleanest city in Africa,” he indicated.