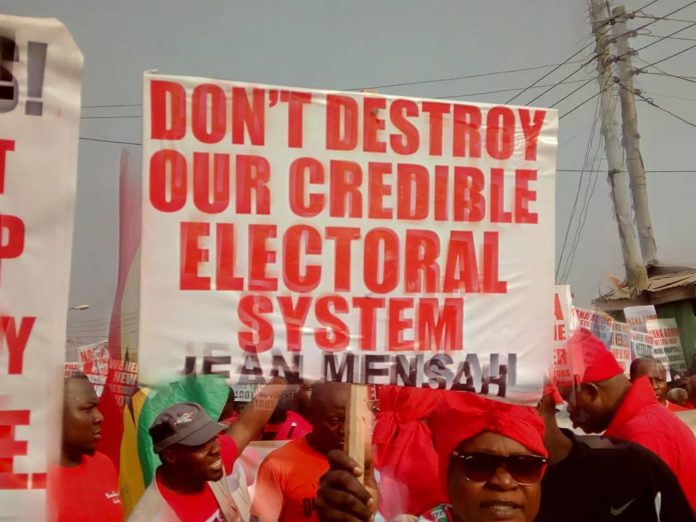 Hundreds of people have rallied in Ghana’s Ashanti Regional capital Kumasi to protest against compiling a new biometric voter register ahead of the country’s 2020 polls.

Led by about six opposition political parties who have formed the Inter Party Resistance Against the New Voter Register (IPRAN), the group had already called for a series of demonstrations from the 11-28 January, 2020 against the EC’s decision.

Their grievances are not just about the $147m cost of the project, but the lack of transparency and concerns over the addition of facial recognition, citing reports of the poor accuracy of the proposed systems when analysing black faces.

The NDC branch in the Ashanti Region expects 20,000 people to join the demonstration in Kumasi today.

The NDC’s Ashanti Regional Secretary, Kwame Zu, said the protestors will pour their frustrations “on the streets of Kumasi in a peaceful way.”

“We expect to see not less than 20,000 pour onto the streets of Kumasi tomorrow and this in our bid to demonstrate and convey our displeasure at the consultative posture of the Electoral Commission,” he told Accra-based, Citi FM.

Heavily armed police officers have already been deployed to protect life and property.

The Ashanti Regional Police Command said it will deal ruthlessly with anybody who foment trouble.

“The Media is entreated to caution all persons or groups that no acts of lawlessness i.e. burning of lorry tyres, throwing of stones, harassment of bystanders and hawkers will be entertained during the demonstration. The Police will ensure that acts that will undermine public peace and order as well as flouts the Public Order will not be entertained”, Public Relations Officer of the Command, ASP Godwin Ahianyo said in a statement on Monday.

Why are we here?

The decision to compile a new register by the country’s Electoral Commission has been met with criticisms by many stakeholders with the opposition National Democratic Congress (NDC) at the forefront.

This decision came after an Inter-Party Advisory Committee (IPAC) meeting in 2019.

Among other demands it stated that the existing register was not credible enough for the general elections in 2020 because the current register is bloated.

The Commission also justified the decision to introduce a new biometric verification system claiming the current one is deficient.

Already, 18 Civil Society Organisations (CSOs) have rejected the proposal to compile a new electoral roll ahead of the 2020 presidential and parliamentary elections.

Edward Adeti writes: Soyinka, Anas, the Partridge and the Poacher