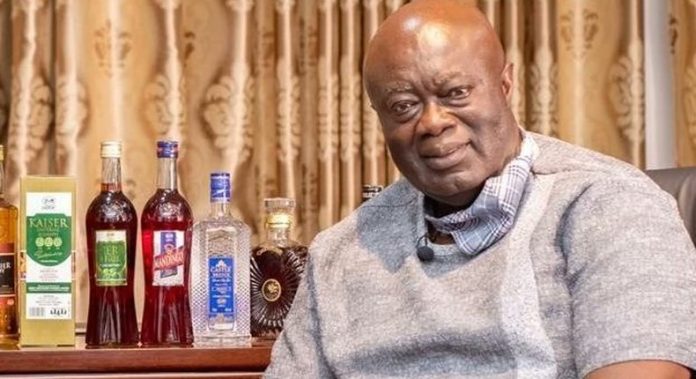 The Managing Director of the Ghana Industrial Holding Corporation (GIHOC) distilleries has asked Ghanaians who cannot afford the increased prices of alcohol to drink water.

Maxwell Kofi Jumah is reported to have said this in an interview on Kumasi-based Nhyira FM on Thursday, March 17, 2022.

The radio station made a post on its official Facebook page in which it reported the GIHOC MD as saying that his outfit has increased the prices of alcoholic beverages, and will continue to do so. He then went further to urge Ghanaians who are not prepared to pay the new prices to replace alcohol with water.

“We have increased the price of alcohol and we will continue to increase it. If you are not ready to buy then stop drinking alcohol and drink water,” Jumah said as quoted by Nhyira FM.

This announcement comes at the time prices of almost everything including fuel, food, transport among other things have skyrocketed, putting extra burden on the already suffering Ghanaian.

Some Facebook users have been expressing mixed reactions to Mr. Jumah’s call, with some saying his choice of words was disrespectful to the Ghanaian people, while others say they will not be affected because they don’t drink alcohol.

Below are some of the reactions:

Pride thats all. No respect for citizens and u seek respect from us with this impudence.

Lol, that’s my back case, as far as I don’t even know how alcohol taste! So Mr Maxwell, you can sky rocket the price, in fact you can choose to planet rocket it Imao lol

Association of drinkers, we will protest, no you can’t give us an impromptu announcement like that. Lol.

Where is the Drunkards Association of Ghana? I want to hear their response

He just insulted all his customers. Funny enough he will still cash in on them..smh

Is he drunk?…. Has he forgotten where his salary comes from….