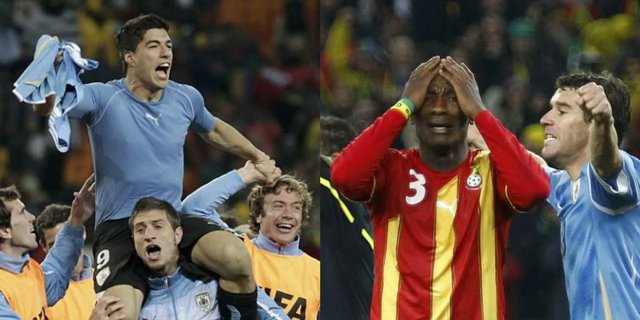 Uruguay legend Luis Suarez says he will not in any way apologize to Ghanaians because he wasn’t the one who missed the 2010 penalty.

According to him, he screamed when Gyan failed to put the ball into the back of the net when he handled Dominic Adiyiah’s goal-bound header in the closing stages of the extra time.

He says he will never apologize to the West African country because he is not responsible for the penalty miss because it was Asamoah Gyan who misses the crucial kick.

Speaking at a pre-match conference today in Doha, Suarez said he had no apologies to give as his handball resulted in a penalty which was missed, adding that he was adequately punished with a sending-off.

“The first time, I don’t apologise about that. Because, I take the handball – but the Ghana player miss a penalty, not me,” Suarez said.

“Because I don’t miss the penalty, you see the player who missed the penalty said that he will do the same in this situation, it’s not my responsibility they shoot the penalty”.

The Black Stars of Ghana will face Uruguay at 3 pm GMT at the Al Janoub Stadium for a place in the round of 16 of the FIFA World Cup Qatar 2022.

‘Your face like a frog’ – Musician Akosua Agyapong attacks journalist