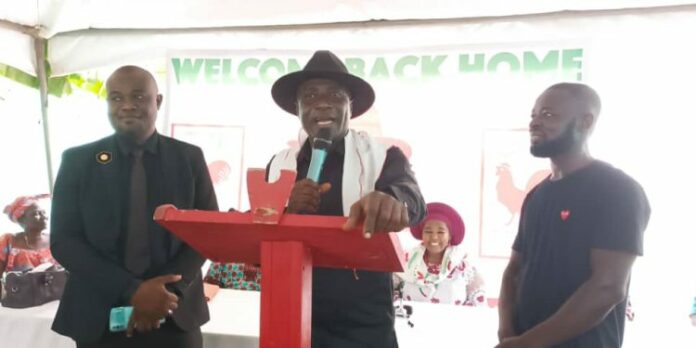 The Convention People’s Party (CPP) on Friday outdoored radio presenter Captain Smart as a party member in line with plans to reactivate the energies of some prominent Ghanaians towards the “Grand Mobilisation Drive” of the party.

He was unveiled by leaders of the CPP at the party headquarters at Asylum Down in Accra today (Jan 19, 2023).

The chairperson of the CPP, Nana Akosua Frimpomaa led the event, which she said was an occasion for the party to “reactivate the energies of some prominent Ghanaians towards the Grand Mobilisation Drive”.

Captain Smart whose real name is Blessed Godsbrain Smart, at the ceremony said he first joined the party in 2006 and contested the Ashanti Regional Chairman position in 2007 but lost.

The outspoken radio presenter said he was an inactive member but after 16 years of inactivity, he was now reviving his membership.

Smart is the host of the radio programme Onua Maakye, aired simultaneously on television on Onua TV and on the radio on Onua FM, both media outlets under the Media General group.

In a speech, he said the decision to reactivate his membership of the CPP was long overdue.

“I am happy to be home and it feels good. There is no going back. I am back to contribute my quota, bringing all my experiences so that together, we can make Ghana great,” he said.

He was given his membership card at the event.

Ghanaian violently assaults wife with axe for denying him sex