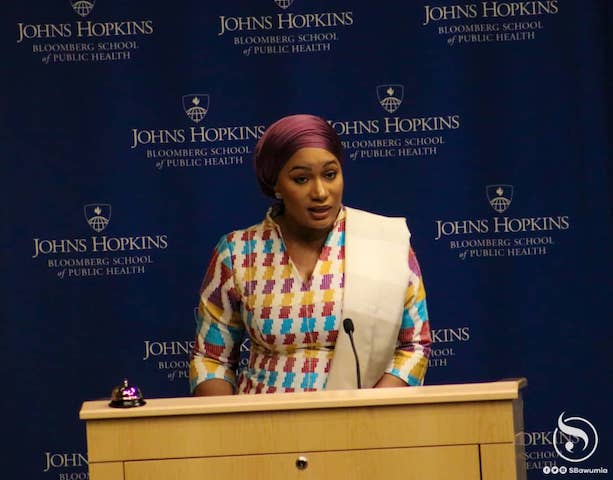 Ghana’s Second Lady, Hajia Mrs Samira Bawumia, has called for the inclusion of women in pivotal roles in society’s development.

She made this call at the “Faces of Africa” Summit, at Johns Hopkins Bloomberg School of Public Health, in Maryland, USA.

The summit, an annual, week-long program organised by the African Public Health Network (APHN), of the university, seeks to promote conversations around Public Health and Gender Equality on the African Continent. This year, the theme, “Achieving Gender Equality and Empowerment of Females: African Women on the frontline”, is in line with the vision of the Second Lady’s not-for-profit organisation, Samira Empowerment and Humanitarian Projects (SEHP).

The summit is also designed to showcase African culture and society, while bringing to the fore, women who are making strides in the socio-economic and political spheres of the continent.

Mrs Bawumia stressed the need for governments and decision making bodies to prioritise women in critical areas of our national lives. “Providing women and girls with equal access to education, health care, decent work, and representation in political and economic decision-making processes as well as eliminating sexual and gender-based violence and harmful practices will fuel economic growth and benefit societies and humanity at large”, she noted.

In the area of health, Mrs Bawumia who also doubles as a champion of maternal health, made a case that gender inequality was linked to poor women health, in Africa. She cited lack of access to health facilities, as a result of low economic power.

On education, the Second Lady, noted that, “education and skills are essential for the realization of individual potential, national economic growth, social development and the fostering of global citizenship. However, the gender gap in educational attainment at all levels in many African countries remains very high”.

It can be recalled that, not too long ago, Mrs Bawumia, a global amabassador for the UN’s Clean Cooking Alliance, delivered a similar lecture, at the prestigious Warwick University, in the United Kingdom. Women Empowerment is at the heart of her work with her not-for-profit organisation, SEHP.

Through SEHP, Mrs Bawumia has initiated a number of critical interventions in the areas of health, education and empowerment, with special emphasis on women. Notable amongst them is the ‘Safe Delivery Project’, an initiative that seeks to reduce maternal and neonatal mortality in deprived communities.

SEHP’s ‘Library-In-A-Box’ project has distributed over  forty thousand (40,000) books to about sixty (60) schools in  ten (10) regions across Ghana. A total of about 40,000 pupils are expected to benefit from these books. This is in fulfillment of a quest to improve literacy and instill a culture of reading among students in Ghana, especially the girl child.

SEHP with support from the United Nations Population Fund (UNFPA) has launched a Coalition of People against Sexual and Gender Based Violence and Harmful Practices (CoPASH) to spearhead a national response to the issues of SGBV/HPs including case management and increasing prevention efforts in Ghana.

Mrs Bawumia was, recently, named the “Queen of Humanitarian Projects” by the Human Achievers Foundation in India. She was also crowned the “African Woman of Excellence 2018” by the Africa Union and the Diasporan African Forum.