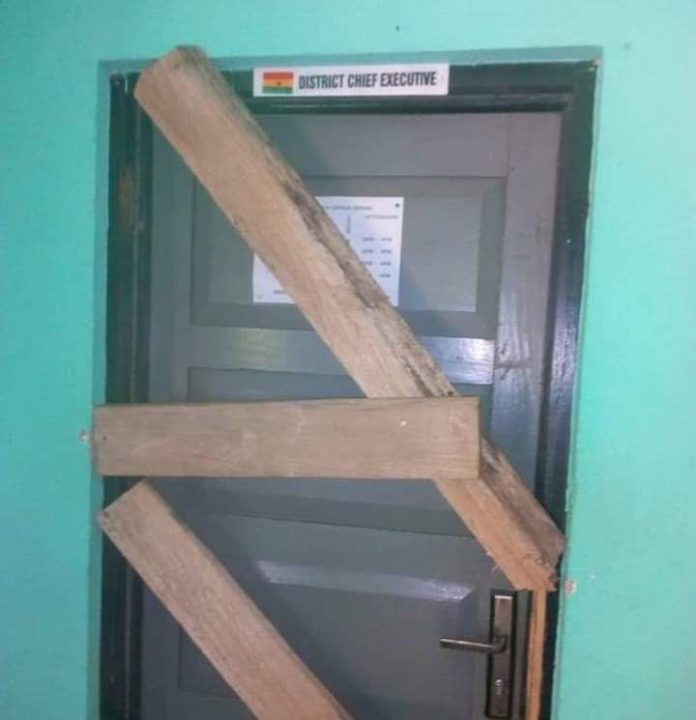 The District Chief Executive (DCE) of Krachi West in the newly created Oti region was Tuesday locked out by some angry youth of the governing New Patriotic Party (NPP).

Mr Douglas Osei Nti is being accused by the youth of embezzlement and want him out of office.

He was subsequently placed under military protection for his safety, according to local network Class FM.

The leader of the irate youth said they took the DCE out gently without manhandling him, adding that they merely wanted to have a peaceful conversation with him.

He told Blessed Sogah in an interview that the DCE “is representing the president”, and, so, if the youth had any concerns and reservations about his tenure of office, they should have first reported the matter to the Regional Ministry for redress rather than take the law into their own hands.

He later told Valentina Ofori-Afriyie on Class FM’s 505 news programme that “the law must deal with them”, adding that: “If they are party members, and so what?”

Meanwhile, the main opposition National Democratic Congress’ deputy communication officer for the region, Mr Abraham Boafo, has condemned the thuggery in a statement, saying: “I want to sincerely condemn this unfortunate and undemocratic act by the hoodlums”.

He said: “The office of the DCE is a public office, it is not meant for only members of the NPP in Krachi West. The DCE, who is the representative of the president at the district level, must be accessed by all at any point in time, so, locking up his office during working hours is condemnable and very unfortunate”.

The statement warned that the NDC in the Oti Region “won’t tolerate” the insecurity being stirred in the region by the “NPP hoodlums and monsters”.