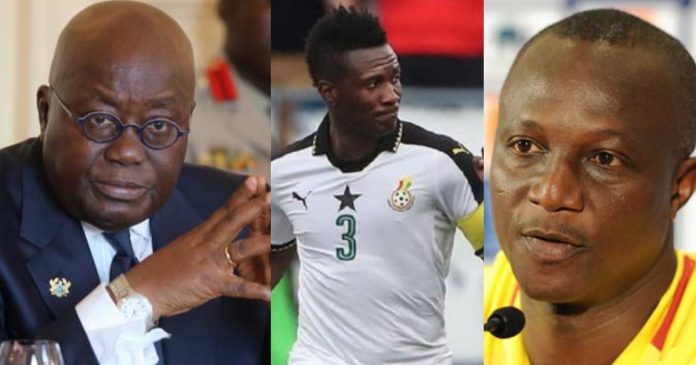 The president, who intervened during the disagreement, tweeted “Way to go” after the duo met to iron out their differences.

Appiah patched up with his General Captain following a disagreement over the captaincy position. Gyan announced his retirement from the team based on coach Appiah’s decision to take the captain’s armband from him ahead of the 2019 Africa Nations Cup in Egypt.

The band was handed over to his deputy Andre Ayew a day after Gyan had reversed his decision following an intervention by president Akufo-Addo. He was subsequently named the General Captain.

Prior to the team’s departure for pre-tournament training in Dubai on June 1, the striker had met with the Black Stars coach to smoke the peace pipe.

A 29-man squad in his provisional list for the 2019 Africa Cup of Nation scheduled for Egypt, next month.

The team will depart Accra, on Saturday, June 1, for pre-tournament preparations in Dubai, ahead of the competition. Of the 29 players, the final 23 will be named to represent Ghana at the tournament.

The GFA Normalization Committee has lined up two high profile preparatory matches for the Black Stars against Namibia and South Africa.

Meanwhile, the following are the additional backroom staff joining the Black Stars technical team for the competition.