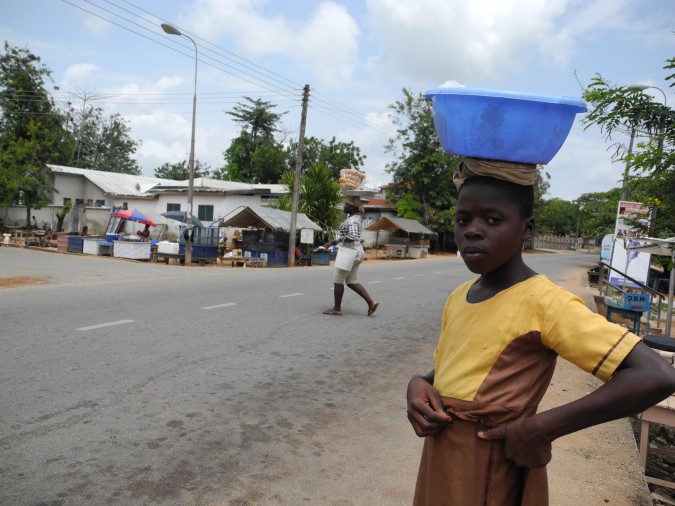 There is an elephant in the room: a problem that, if tenable, I’d have put into the ‘disturbing new developments’ file.

It has been woven into the very fabric of society, and although governments present and past have talked a good game of finding a lasting solution, they’ve done little more than play the ostrich and bury their heads in the sand. Between elections, there’s apparently little time to do anything that doesn’t translate directly to votes gained.

You see, I recently adopted this ritual of an early morning jog around my neighborhood. On my route back home each morning, without fail, I find this girl by the street displaying wares for sale; for one probably no older than 12, her regular presence there doesn’t really seem like a matter of choice. It’s admittedly tough for me not to get emotional about this subject — and perhaps much of my reaction to things like these is robbed of objectivity under that circumstance — but I’ll try advancing some common sense here.

Given Ghana’s status as a third-world country, we have some good to write about, but also much bad — like the enduring plague of poverty. I get that there is hardly an easy or quick fix to such complex problems and that, even with the best intentions, these will be overcome with much difficulty. I do wonder, however, if there’s any time better than now to buckle up and have a serious national conversation regarding the poverty that’s so endemic in these parts. Should the problem prove bigger than we realize — as I suspect it would — after such a candid assessment, what would it imply for our society going forward?

It’s easy to forget the positive(s) in instances as these, for it is not all doom and gloom. We have made great progress on several fronts, as people have always found a way to channel adversity into fuel toward attaining greater heights. There are several examples of such success stories all over the place, but the odds generally tip to the side of perpetual poverty should a young lad be caught in these challenging circumstances. Think about it:

Can we genuinely say that poverty in Ghana is lower now than it was a decade or two ago?

If not, to what might we attribute that lack of decline?

Is every child not in school – if they have access to education at all – and forced to fend for their family at an age so tender not being plunged into a vicious cycle of poverty?

If so, isn’t the job of the government cut out for itself?

What else does government need to be armed with in tackling the problem?

Can’t the government put in place measures to rid the streets of little children carrying out economic activities during school hours?

And then there is the role each of us has to play:

When and how do we take a break from our preoccupation with endless politics, numbing comforts and time spent talking about our wonderfully sheltered lives on social media to deal with issues that really matter?

It’s time, in our own little ways, to face this gnawing problem head-on, folks. Ready?