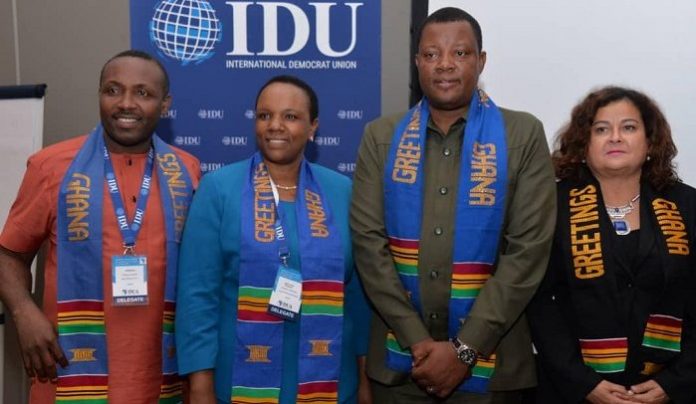 THE GENERAL Secretary of the New Patriotic Party (NPP), John Boadu has been elected Vice Chairman of the Democrat Union of Africa.

The election was held on Tuesday, February 5, 2019 in Accra during DUA’s 2019 Conference which took place at the Labadi Beach Hotel.

DUA is the African Chapter of the International Democrat Union (IDU) which is the global alliance of all centre-right to right wing political parties as well as like-minded organizations and think-tanks dedicated to promoting conservative ideology and democratic principles in Africa and around the world.

Presidential candidate of the Democratic Movement (PDM), a leading political party in Namibia, MacHenry Venaam, was elected as the Chairman of DUA during the conference.

The Accra conference was hosted by the NPP with partnership and support from the Westminster Foundation for Democracy, the Conservative Party of United Kingdom as well as the Konrad Adenauer Stiftung.

The conference was used to advance preparations towards the re-launch of DUA for the purpose of rejuvenating the Union to effectively promote the goals and aspirations of the African people.

A highlight of the conference was the conferment on President Akufo-Addo, the title of an Honorary Patron of DUA by IDU for his unflinching commitment to the ideals of IDU including the promotion of democracy, rule of law and good governance in Ghana on the African continent.

Your coup comment is disappointing, unfortunate – Oppong Nkrumah to Atuguba