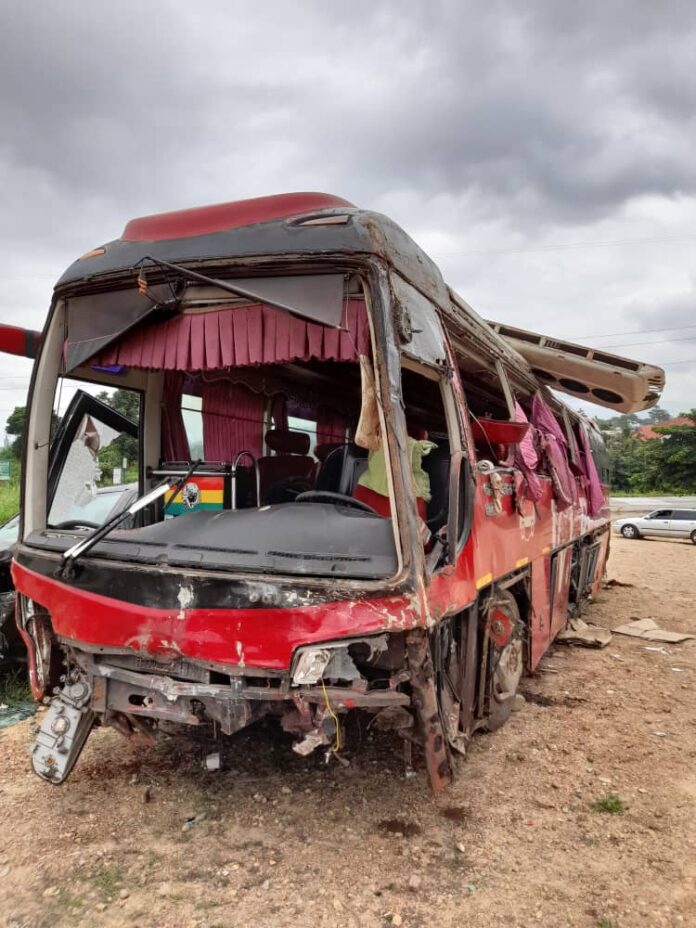 Two people have been confirmed dead while another is in critical condition in an accident which occured in the early hours of Saturday at Juaso on the Accra-Kumasi highway, the Ghana Police Service said in a statement.

The deceased, have been named as Frederick Oduro, aged 38, and Kwadwo Oppong, 46, the police at the Konongo Division said in a report sighted by dailymailgh.com.

“Some of the occupants on board the KIA Grandbird bus sustained injuries and were rushed to the Juaso Government Hospital for treatment”, the police said in its report.

One of the victims has been referred to the Komfo Anokye Teaching Hospital (KATH) for further treatment, the report added. Bodies of the deceased have been deposited at the Steward Mortuary at Yawkwei near Konongo.

The badly mangled vehicles have been towed from the accident scene.

This is the second time an accident was recorded on that stretch in the last 24 hours after a similar one at Nobewam on the Accra-Konongo-Kumasi motor road.

Four people were killed while nine others got injured and were sent to the Juaso Government Hospital for treatment.

Road accidents are rare in the Ashanti Region. Bad roads, disregard for road traffic regulations contribute to the increasing number of carnages in the region.

Figures at the Motor Traffic and Transport Department of the Ghana Police Service show that 295 road accidents were recorded between January and June.