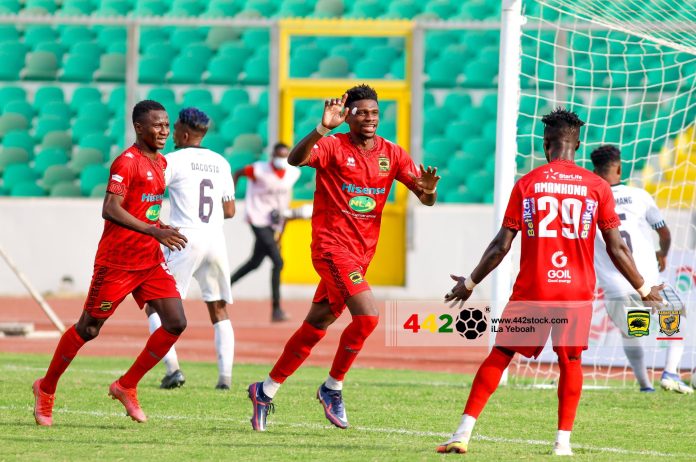 The Porcupine Warriors produced a masterclass performance in the second half to thump their neighbors to stretch their lead at the top of the league table after 11 matches with a game in hand.

Etouga’s 46th minute headed from Ibrahim Imoro’s corner kick towards goal seemed to have crossed the line as the keeper dives to palm it out. The player’s jubilation was cut short as the referee signaled for play to continue.

Nine minutes later, Mfegue connected a through pass with a low shot, and the ball was heading into the posts when a defender dived to intercept it with his hand and gave the referee an easy penalty decision to make.

Etuoga stood up to it and sent the keeper the wrong way to give the Kumasi-based club a deserving lead from the spot.

Seven minutes after the hour mark, Kotoko’s splendid buildup from the back saw a through pass flashed into the Ashgold box, Mfegue latched on it and with a shot which the Ashgold defence struggled to clear. The ball fell on the path of the Cameroonian who slotted it in with a cool finish to make it 2-0.

Elijah Addai scored a consolation goal on the 85th minute for Ashantigold to make it 3-1 at the end of the match.

62% of Ghanaians will vote for Mahama if elections were held...