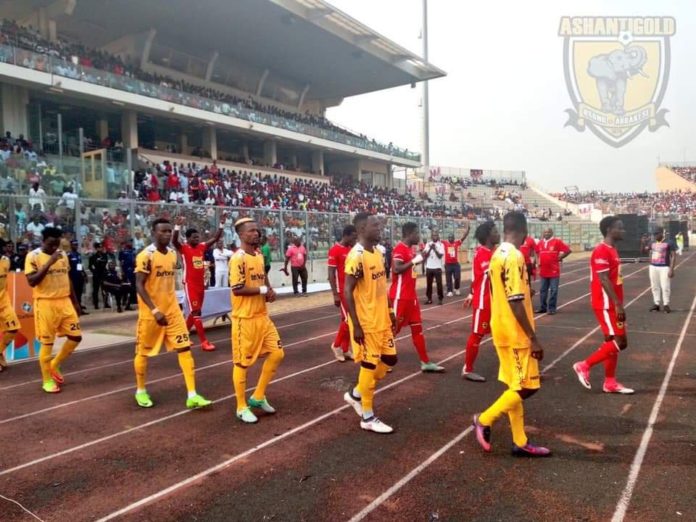 Of course, you have. If not, well, here’s the latest gist in town: the 2019/20 Ghana Premier League season has been annulled, even as the COVID-19 pandemic tightens its grip on life as we’ve always known it, but we still have two sides representing the nation in African inter-club competitions – Asante Kotoko for the Caf Champions League, regional rivals Ashantigold for the Caf Confederation Cup.

Okay, so that latter part isn’t exactly new, as both clubs held Ghana’s tickets in the 2019 editions of those competitions.

But, wait — what’s that other thing we already know?

That they’re probably not going to make any more of these slots than they did last time out, right?

Yes, but let’s not be too loud with such negative talk, shall we?

“Allow them to go and disgrace themselves,” Alhaji Grunsah, owner of the Ashanti Region’s third Premier League club, said on Kumasi FM earlier this week. “They represented the country during the era of the Normalization Committee and brought nothing but shame.”

Grunsah’s point, drained of its biting venom, is painfully obvious. It’s painfully valid, too. Kotoko’s most recent bid to reach the Champions League’s group stage, 13 years after they last did, crashed one round short, following elimination by Tunisia’s Etoile du Sahel. They dropped to the Confederation Cup’s playoffs – where Ashgold might have lurked, had they fared any better in the previous round against their own North African opponents, RS Berkane – but got stung again, this time by San Pedro from just across the Ivorian border.

And this record of failure stretches farther back, blurring an even more distant past when these two clubs were fearsome, formidable forces in Africa. Kotoko have twice conquered the continent, but looking at them now, you wouldn’t know it. Maybe that’s because their last championship came in 1983, long before my generation knew the world. More likely, though, it is because Kotoko have lost their way, not playing in an African final since the mid-noughties.

It’s a similar tale, grace-to-grass, for Ashgold. They’ve lost, more than just their way, the financial and structural arm of the Obuasi-based mining firm which flexed powerfully in pushing their golden run of the nineties, when the club – then called Goldfields – won three league titles on the bounce at the dawn of the professional era, and also reached the maiden Champions League final.

Unlike Grunsah, however, we can’t sneer at either Kotoko or Ashgold just yet.

At present, both are – or, at least, they believe they are – on the road to recovering their best years. Ashgold look rejuvenated under the patronage of Dr. Kwaku Frimpong, the healthcare guru who has just installed his 27-year-old son, Emmanuel, as Chief Executive Officer (CEO); Roy Arthur, an experienced local administrator, joins as Sporting Director. Not many miles away in Kumasi, Kotoko have also freshened up their hierarchy, with a 12-person board recently appointed by the Manhyia Palace to steer the club’s affairs; a new CEO, says the grapevine, is also in the works.

Now, all that might not translate to immediate success, especially in Africa, where both have been off the radar for years; and, really, nobody is asking them to go win their respective competitions. Those heights are still far off, if ever attainable, but they could at least do well. How well they actually do would also depend, as is the norm in the context of African football, on the level of support enjoyed during their home games.

Not many – not any, perhaps – would show up at their stadia, I suspect, if COVID-19’s rate of spread doesn’t slow, which wouldn’t exactly boost morale or fill coffers that must be drying up after months of inactivity. For two clubs whose fanbases – generous and passionate – are great assets, they’d only be as strong as a porcupine shorn of its quills, or an elephant without tusks.

You get the picture.

Still, be positive. Even Grunsah, though boiling with pessimism, is.

“[Ghana] cannot waste our slots hence they can keep on trying [to make an impression in Africa]. It may be better for them someday.”

For now, we laugh hope.

We can’t work with a ‘disrespectful DCE’ – Asokore chiefs to...