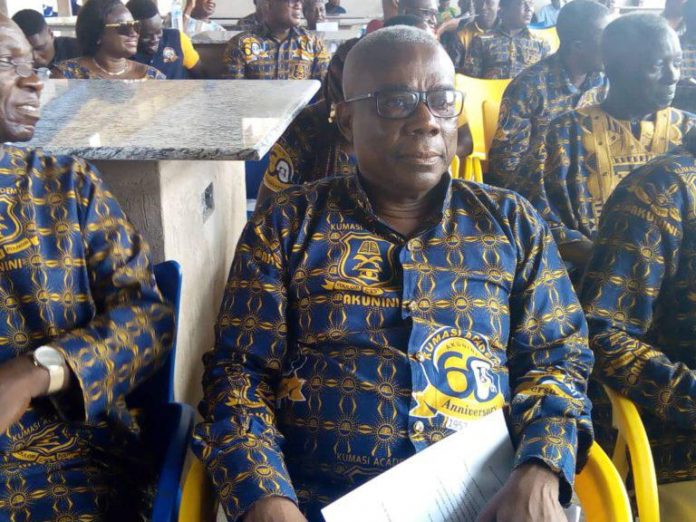 The Kumasi Academy Past Students Association (AKUNINI), held their 5th National Congress and Homecoming over the weekend.

The formal gathering brought together several Akunini from the whole country and the diaspora to elect new national executives, discuss the best way forward for the alumni association, as well as how the past students can help their alma mater.

Held under the theme “Let our presence be felt as Past Students on campus, in the country, and the Diaspora”, the 5th national congress and homecoming was a big success.

The 3-day event began with a candlelight procession on Friday, July 12, 2019, through the principal streets of Asokore-Mampong community. This took effect in memory of the students who perished in 2017.

Speaking at the congress, the National President, Dr Kwabena Dapaah-Siakwan advised prospective National Executives to embrace the fact that “the offices are sacrificial, with no remunerations but they would be required to carry out their duties as prescribed by the constitution.”

The following persons were elected as National Executives at the congress; they include Dr Kwabena Dapaah-Siakwan (President), Mr John A. Kokofu (Vice President), and Dr Hayford Baah-Adade (Financial Secretary). Others were Mr Ebenezer Teitey-Sackey, for the General Secretary position, while Mr Frank Bio and Ms Gifty Bio occupied the Assistant Secretary and Treasurer positions, respectively.

The National President acknowledged the work done by the previous administration and encouraged members to contribute diligently to ensure current executives succeed in their mandate.

The association is also embarking on a multi-purpose science lab project — a vision which was conceived by the 2012-2015 National Executive Committee (NEC).

Dr Dapaah-Siakwan stated that the building, as at 30th June cost Ghc901, 138.38. The edifice is still under construction and in this regard, he encouraged members who occupy influential positions to lobby for their “companies and organisations to support this project in cash or kind and we will credit you with such a donation as indeed we have done so for others.”

A thanksgiving service was also held on Sunday, July 14, 2019, to climax the congress.

Speaking at the service, the headmaster of Kumasi Academy, Rev. Sylvester Osei Owusu also expressed gratitude to past students for their unflinching support.

The National President also encouraged students to study well and be proud of the school that has produced several influential personalities in the country.

An undisclosed amount of money was also presented to the school’s 2019 National Science & Maths Quiz contestants for the remarkable feat achieved at the competition.