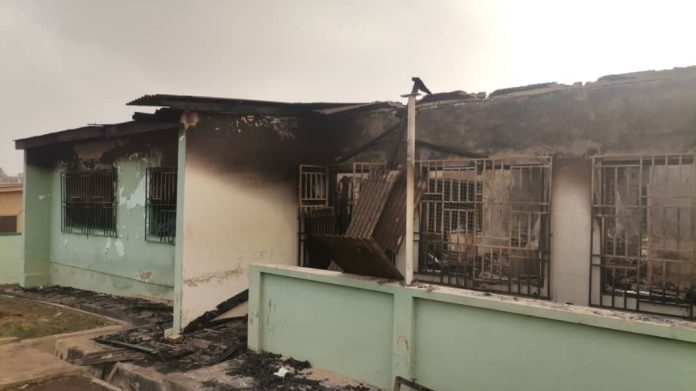 Two children have died following an apartment fire at Buokrom B-Line, a suburb of the Ashanti Regional capital Kumasi. Emergency services have confirmed the children aged 12 and 2 months old got trapped as the fire swept through the building on Christmas Eve.

At least three others who suffered injuries have been referred to the Komfo Anokye Teaching Hospital (KATH), for further treatment, according to witnesses who claimed a fourth victim had been treated and discharged.

It was not known what caused the pre-dawn blaze which came just days after a three-year-old girl was killed at Ejisu when a 14-bedroom house caught fire.

Firefighters who rushed to the scene said the three-bedroom house was well alight and the surviving victims who got trapped were rescued.

”I heard someone screamed that fire had engulfed the house. A woman managed to escape and another man also came unhurt. But unfortunately the children got trapped and died. They would have survived but it took a long time before the firefighters came to the scene”, an affected victim said.

Fire crew who were at the scene said the situation was “under control”. A spokesperson of the Ashanti Regional Fire Service D.O. III Peter Addai Osei explained, ‘we had a distress call that there was fire outbreak at Buokrom Estate, B Line. We saw that two people have been burnt[to death]. Some few people sustained various degrees of injury and have been sent to the Komfo Anokye Teaching Hospital for treatment’.

‘Investigations are underway and we will let you know when we get any information’, he added

A scene of horror

Manhyia North MP, Akwasi Konadu described the scene as horror. The lawmaker who was at the scene to commiserate with affected cautioned residents to take safety precautions at home to avert such avoidable disasters.

‘It’s a scene of horror’, Konadu said adding: ‘But what I would want to say is that we must be safety cautious…Inasmuch as we are trying to protect ourselves we must take some safety precautions to prevent such fires’.

‘It’s a sorry state and this is the fifth fire that has occurred in the constituency within this year with children as casualties’, he said.