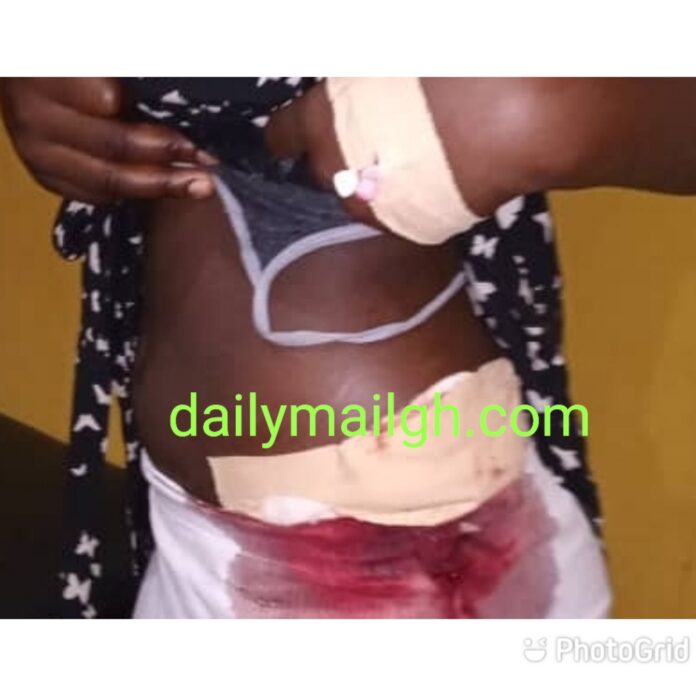 A woman was shot during a robbery attack in Kumasi, the police in the Ashanti Regional capital have confirmed.

The incident occured on June 1, at about 08:30 a.m. at Sunset Security, a private security firm located at the Krofrom Electoral Area.

The armed men entered the company’s premises and robbed them of a cash amount of ¢190,000, witnesses told dailymailgh.com.

The robbers later shot and wounded the woman on her left side of her waist and sped off on a motorbike.The victim was rushed to the Manhyia Government Hospital for treatment.

Officers from the Tafo Divisional Police Command visited the location and found blood stains spattered at the scene.

A spent shell suspected to have been discharged by the robbers was also retrieved.

No arrest has been made as police say Investigations have started.

K’si: One killed, another injured as robbers raid shop at Buokrom Estate – bolt with ¢140k

A 43-year-old man, Collins Dapaah who was shot during a robbery incident at Buokrom Estate in Kumasi died while receiving treatment at a health facility.

According to the police, in the early hours of Tuesday, June 1, 2021, four armed men on a motorbike stormed a non-bank financial agency and stole an amount of GHS 138,000.

Speaking to the media at a news conference, the Public Relations Officer of the Ashanti Regional Police Command, ASP Godwin Ahianyo, called on the public to assist them to arrest the culprits.

“The armed men in the process shot a customer who was later identified as Collins Dapaah Hayford aged 43. The victim was rushed to the Manhyia Hospital for treatment but was pronounced dead on arrival. His body has since been deposited at the Ebenezer Hospital Morgue pending an autopsy. Meanwhile, the police is picking some reliable leads that will help apprehend the perpetrators of this heinous crime. The command would like to inform the public through the media that all cases of crimes reported in the region are under investigation. Some are in court and others are pending to be sent to court anytime soon” he said.

ASP Godwin Ahianyo also disclosed that four suspected notorious armed robbers in the region have been arrested and remanded into police custody.

“The suspects are Mustapha Adams 37, Ibrahim Adamu 39, Aseidu Ona Alas L.ion 33, and Mohammed Abubakar, 33. The suspects are in police custody assisting with the Police investigation. It will be recalled that on Thursday 25th March, 2021, one Emmanuel Antwi aged 40 now deceased was robbed of Toyota Prado vehicle by three armed men,” he said.

Also, he says these suspects have been arrested in relation to other related robberies in the region.

“Investigation so far has revealed that the above-named suspects perpetrated that crime. Subsequent investigation has also established that these suspects are involved in many other robberies cases reported in the region” he said

Meanwhile, residents who live in Buokrom Estate say the level of insecurity in the area is worrying.

A troubled resident who spoke to Citi FM said “almost every week there are armed robbers patrolling all over this place.”

Another resident said armed robbers “have been breaking into the containers here. By the time you will come in the next morning, you will realize that almost all of your goods are gone. We are afraid for our lives.”