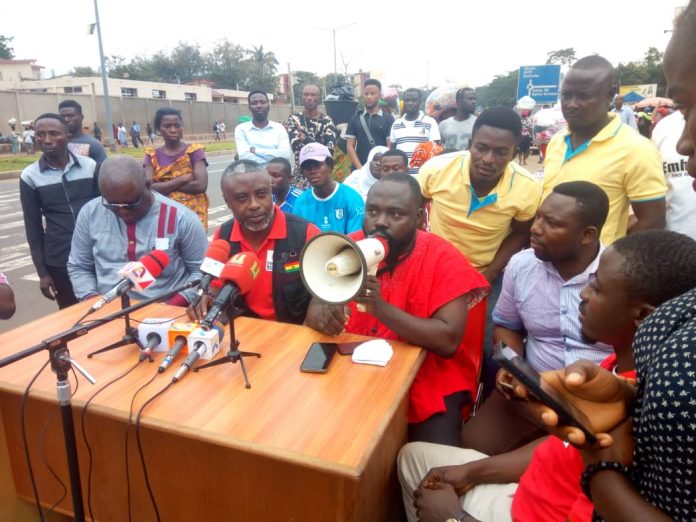 Thousands of people will on Thursday, September 19, 2019 hit the streets of Kumasi, the Ashanti Regional capital to protest against failures to tackle corruption, economic mismanagement and injustice under President Akufo-Addo.

A political pressure group, Coalition for National Sovereignty has cited corruption, insecurity, fuel and utility hikes, as well as rising taxes as major factors contributing to the hardships of the citizenry.

Addressing the media, a leading member of the Coalition, Desmond Ntow, said President Akufo-Addo had failed in his promise to make life better for all Ghanaians.

“As Ghanaians continue to suffer from hardships, Akufo-Addo and his appointees continue to engage in corruption and continue to steal the taxpayers monies. As a result of the foregoing, the Coalition serve notice that, we will embark on a demonstration in Kumasi.”

Since the assumption of office of the governing New Patriotic Party (NPP) Ghanaians have witnessed a number of protests from different groups over what they termed as ‘severe hardships’ in the country.

These groups have among other things, raised concerns about what they say is the general state of insecurity in the country, attacks against press freedom and economic hardships.

Government has however been touting its achievement since it assumed office.

President Akufo-Addo at a recent gathering said his administration has spent the last two years putting in place measures to improve the fundamentals of Ghana’s economy, which, in recent years, had been in considerable disarray, necessitating recourse to an IMF bailout programme.

“We have been moderately successful in trying to grow the Ghanaian economy, ensuring that our economy grew from 3.6% in 2016, the lowest in two decades, to 8.5% in 2017, our first year in office, to 6% last year, and is projected to grow by 7.9% in 2019, making it one of the fastest growing economies in Africa,” Mr Akufo-Addo said while addressing Ghanaian Nationals in Malta in March.

Covid-19: No Friday prayers until further notice – Chief Imam to...

Another batch of stranded Ghanaians in UK return July 2