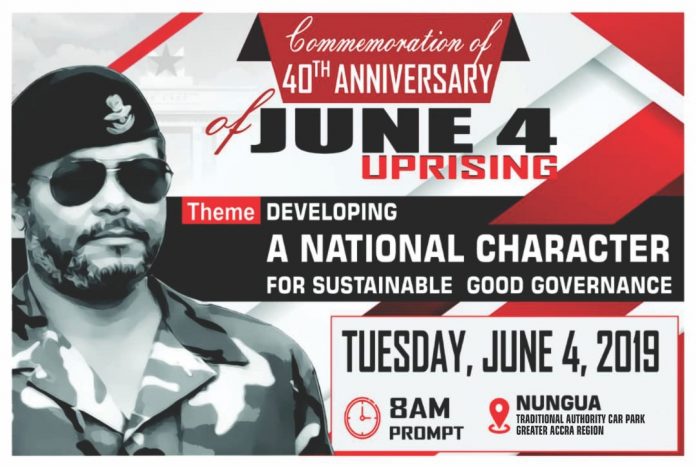 Former President Jerry John Rawlings and other leading members of the June 4 uprising will on Tuesday address a grand durbar of chiefs and people at the Nungua Traditional Authority Park, to mark the 40th anniversary of the 1979 uprising.

According to the anniversary planning committee the durbar, which commences at 8.30am will begin with a parade of young cadres, followed by a wreath-laying ceremony for the departed heroes after which solidarity messages will be delivered by a host of dignitaries including NDC General Secretary, Johnson Asiedu Nketia and cadre, Eric Bortey.

This year’s celebrations have been under the theme, ‘Developing a national character for sustainable good governance”, and has already seen two commemorative events – a tree planting exercise on Saturday May 25 and an anniversary lecture delivered by Professor John Bright Aheto at the University of Ghana Business School on Wednesday May 29.

The celebrations are also being observed across the country with lectures and durbars at various local venues.

All cadres, sympathisers of the revolution and the general public are invited to Tuesday’s event.