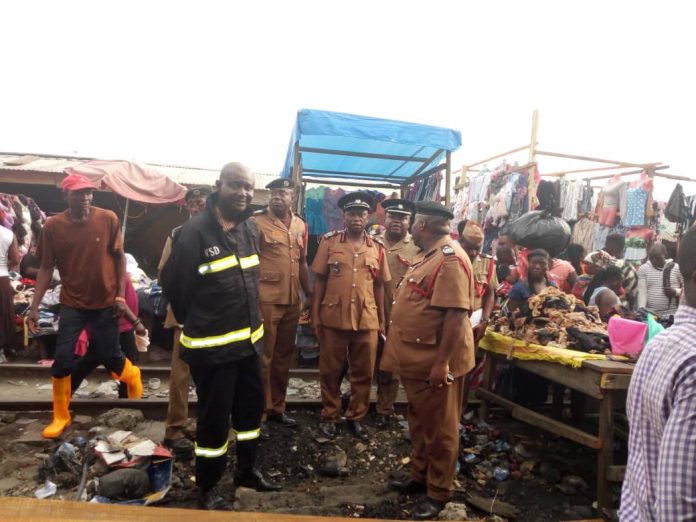 A three-member committee is set to investigate the recent fire outbreaks in major markets in Kumasi, officials say.

The committee will ascertain the sources and causes of the fire outbreaks at the Asafo and Central Markets.

Ghana’s Chief Fire Officer, Edwin Ekow Blankson, made this known when he toured both facilities on Tuesday, April 23, 2019.

Though he did not provide any further details about the committee’s work, it is expected that the body would ascertain the monetary value of the destruction caused by the fires to property and trading commodities.

It is also expected that the committee would recommend remedial measures to prevent future occurrences.

“As at now we have put a three-member committee to look at the fires… I believe this is the first time the fire service has responded to such a challenge. We sympathise with the victims who have been affected by the fire… It is unprecedented that Kumasi should have three fires,” the fire commander said.

Mr Blankson was, however, unhappy with some of the affected traders, after it emerged that they had erected new structures at the scene to commence business.

The traders were busily erecting wooden structures at the Kumasi Central Market to commence business at the time the fire team arrived.

Mr Blankson said the development could affect their investigations.

“I was shocked. I just couldn’t believe it that without the clearance from KMA, they have started reconstruction and that is very dangerous. Now everything is cleared. Nevertheless we are prepared to go deeper for more understanding of what is happening to Ashanti, especially Kumasi in particular”, he explained.

The fire commander’s comments appear to corroborate that of the Kumasi Metropolitan Assembly which had earlier directed affected traders to halt the reconstruction of sheds at the enclave.

The Assembly says government will soon break ground for the commencement of the second phase of the Central Market Redevelopment project.

“Currently, no, we will not allow them rebuild shelters because very soon all this place will wait for assessment from NADMO”, Kumasi Metropolitan Chief Executive, Osei Assibey Antwi told reporters.

Two separate fire incidents at the Asafo Market which occurred just a day after a similar one at the Kumasi Central Market, swept through a number of shops.

Another inferno on Easter Monday, also razed a building at the Grace Chapel of the Calvary Charismatic Center in Kumasi.

The Ashanti Regional Secretariat of the opposition National Democratic Congress is, however, urging government to compensate affected victims.

They also want government to complete stalled market projects that were started by the erstwhile John Mahama administration.

How to ensure poor people in Africa’s cities can still get...

WWLTW 12: Faisal Burning All Over, WAFA Revisit ‘Notorious’ Past