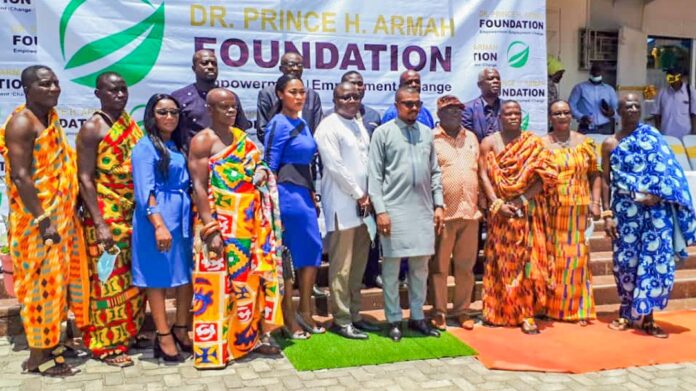 The Dr Prince H Armah Foundation, a non-governmental organization focused on empowerment, employment and entrepreneurship, has been officially launched in Kwesimintsim in the Western Region.

The Foundation is an initiative of Dr Prince Hamid Armah, the Member of Parliament for Kwesiminstim. A governing board for the Foundation was also inaugurated and sworn into office.

Speaking at a short ceremony to mark the occasion on Wednesday, Dr Prince Armah observed that social problems are scarcely solved by government alone and said it was necessary for individuals and organisations with the means to devote themselves to social causes such as eradicating disease and expanding access to health and education.

Dr Armah recounted some of the programmes the foundation had already undertaken, including health screening, training in ICT and vocational trades and donations of books, mathematical sets and other educational materials to students in first and second cycle institutions in Kwesimintsim. The Foundation has also supported the Kwesimintsim Police Command with motorbikes, cement and cash to aid their operations.

Dr Armah said with the formal inauguration of the Foundation, it was poised to achieve more in its quest to improve lives in Kwesimintsim and beyond. He expressed his confidence that the board, with its vast array of talent and varied experience in oil and gas, corporate finance and strategy, hospitality, health management and entrepreneurship, will lead the Foundation to become one of the preeminent charity institutions in the Western Region and the country.

Accepting the charge on behalf of her colleagues, Ms Nana Yaa Arthur, the Aviation Operations superintendent at Tullow Oil and Vice President of Virtuous Board Room, who chairs the governing board, thanked Dr Armah and the team at the Foundation for the honour and confidence and pledged to work assiduously towards the realisation of the Foundation’s laudable goals.

Other members of the board include Mr Albert Tetteh-Entsie, Managing Partner of Febert Consult and ASL Consulting and Managing Director of Febert Oilfield Services Ltd; Dr Benjamin Akumanyi Nkrumah, Chief Executive Officer of the Nhyirakesi Wellness Hospital and Nhyirakesi group of Companies; and Honourable Abdul Buhari Osman, the Deputy Director of the National Disaster Management Organisation (NADMO) in the Effia-Kwesimintsim Municipality. Others are Ms Sylvia Ansah, principal administrator at the Takoradi Technical University, Mr Joe Castrus Otoo, a businessman and hotelier and Mrs Philomena Assifuah a businesswoman and former government appointee to the Effia-Kwesimintsim Municipal Assembly. Mr Augustine Asiljoe, the Acting Chief Executive Officer of the Foundation will also serve on the board, as will the founder, Dr Prince Hamid Armah, who joins in an ex-officio capacity.

Present at the ceremony were officials of the Effia-Kwesimintsim Municipal Assembly, including Honourable Kojo Acquah, Municipal Chief Executive and some traditional leaders in the constituency.

Some beneficiaries of the foundation who attended the event praised Dr Armah for setting up the Foundation, which they said had impacted many lives in the constituency.