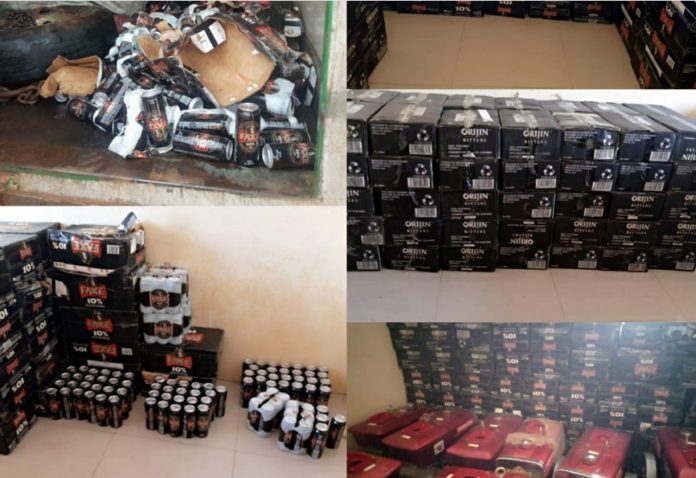 Liberian authorities have impounded a Ghanaian vessel carrying assortment of alcoholic beverages and mining equipment at an unauthorized pier.

The vessel which reportedly arrived at the Port of Buchanan in Grand Bassa County at about 2:00am Tuesday, had onboard 221 cartons of Faxe 10% and 70 cartons of Orijin.

Authorities also confirmed that an assortment of mining equipment believed to have been smuggled into the West African nation for illegal mining activities were also seized.

The goods, authorities said were reportedly bought by Liberians who paid all the required taxes in Ghana, and hired a Ghanaian-owned vessel to smuggle them to Liberia, with the intent to evade taxes, online portal FrontPageAfrica reported .

Commissioner General of the Liberia Revenue Authority (LRA), Thomas Doe-Nah was convinced that the smuggling activities have surged illegal mining activities across the country.

A joint security, the Commissioner said, has been investigating the incident to determine the actual amount in taxes evaded and other details.

“The owners will face penalties in keeping with the revenue laws”, he said. “Smuggling is a major criminal offence under the revenue code of Liberia”.

Liberia loses millions of dollars annually in revenue as a result of smuggling by individuals and businesses who use unapproved routes for cross boarder trade.

The country’s Immigration Service said said out of 176 entry points with its neighbouring countries, only 46 of these are guarded.

In February 2019, for instance, the LRA impounded a truck with a consignment of Heineken beer that was discovered at an entry point in Gardernersville.

The consignment was believed to have been smuggled from Guinea into Liberia.