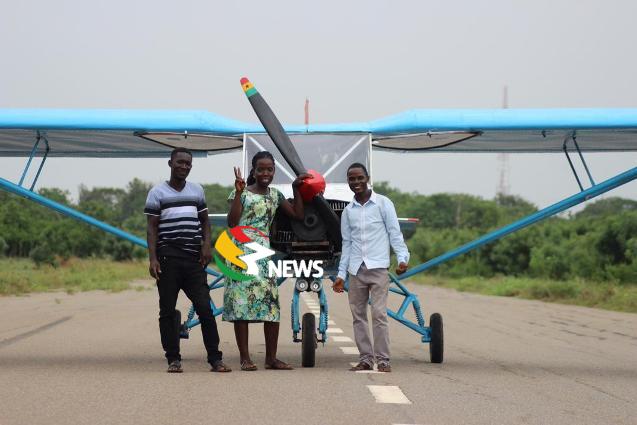 Somewhere in Ghana, a dynamic duo is on a mission to touch the sky, and quite literally too. In a manner reminiscent of Wilbur and Orville Wright – the brothers whose relentless tinkering and innovative endeavour opened up the world to aviation as we know it – these Ghanaian brothers are looking to go airborne and cruise the sky in an aircraft that doesn’t have the trademark of Boeing, Airbus, or Embraer engraved somewhere in the fuselage.

Their names are Isaac Otoo and Jacob Larbi and they are on a mission to take to the skies in an aircraft put together with their own hands in their own backyard. With little more than a rudimentary knowledge of the subject and materials that have been left for trash, the duo may just have a good shot.

Otoo and Larbi grew up as brothers who liked to fiddle with stuff, especially those kinds of stuff most people would say they had no business even thinking about. As kids, they would spend a lot of time in garages and scrapyards poking around with curiosity, looking out for “cool stuff.”

When they turned out a grotesque, crude, haphazard attachment of parts which was supposed to be a motor vehicle as their first creation right about when they turned eight, very few persons thought of it as more than just a phase that will undoubtedly pass once the realities of life sets in.

Well, the realities of life did set in, and it appears the boys who many thought were just ‘playing inventors’ because they probably had too much time on their hands, may actually be on the cusp of something huge this time.

Like most kids, Otoo and Larbi probably flapped their arms, waving excitedly every time an aircraft fizzed past their neighbourhood. Seeing that object hovering in the sky several miles away, crusing on a steady course, and remaining airborne up until it was time to initiate landing, must have been a source of fascination to them.

But unlike most kids, for them, it didn’t stop at waving, clapping, and making chlldish wishes. They were curious about how these ‘big birds’ came about and how they are put together. And so it became something of an unspoken pact between both brothers that they too would someday conquer the skies in an aircraft built by their own hands.

The boys grew older but their appetite for invention never waned and the quest to build an aircraft remained their ultimate mission. And so they got to work, picking the brains of an ex-serviceman who used to be in the Air Force and peering wide-eyed at every aircraft manufacture-related video they could find on Youtube.

By the time they had done this for a while, they had learnt a thing or two about building aircrafts and were willing to roll up their sleeves and put that mostly-rudimentary knowledge to test. But there was just one ‘not-so-small’ detail that had to be taken care of: materials.

This is where both brothers got creative, summoning all their powers of improvisation. As they couldn’t afford actual aircraft parts, they looked around their surroundings and gathered such materials as iron square pipes, plywood, and aluminium sheets. Then, they got their hands on a used Volkswagen engine that runs on petrol. This was to provide the power to drive the propeller.

By employing more finesses than they did with the shabbily-strewn car they built when they were much younger, they were able to build a light aircraft in the backyard of their residence at Dome Pillar 2, which looks a lot like the real deal and could be too.

The GHOFI-1601, as they call it, is a light aircraft that can carry two people at a go and haul a maximum weight of 757 kilograms. The wings of the aircraft are also detachable for easy transportation.

According to the brothers, the aircraft can be used by the security agencies for patrol, and it can also prove useful in large scale agriculture. The brothers also offered that, with some financial assistance, they could build cargo aircrafts that can be used to transport goods.

The result of the effort of the duo currently sits on the tarmac at an airfield in Afienya where it is undergoing test runs, though it won’t be able to take flight just yet since the brothers have not been able to procure a license to fly the plane due to financial constraints.

“The Ghana Civil Aviation has already given us the opportunity to use this runway for testing the aircraft, says Otoo.

“We are not having a license so we do not have a permit to fly. So we need the license, and the license also cost a lot, so we need support from everyone, government and organizations.”

As can be gathered from the brothers, it looks like the ‘quite expensive’ license is the only thing keeping the aircraft from finally taking flight and they are currently on the lookout for financial support from well-meaning individuals and donors whose contributions to their realisation of their dream would be invaluable.

Now, whether the aircraft does eventually take flight or not, Odoo and Larbi certainly get maximum points for effort.