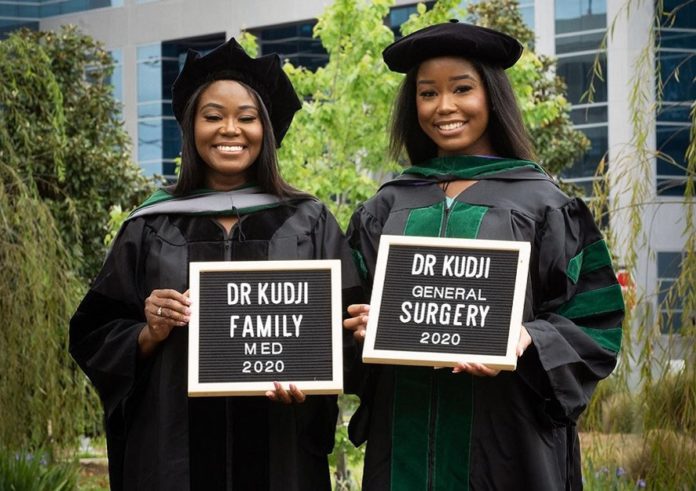 Though Dr. Cynthia Kudji, and her daughter, Dr. Jasmine Kudji, studied medicine at different schools, they are set to undertake their residency at the same institution, making them the first mother and daughter to attend medical school at the same time and match at the same hospital.

An inspirational and remarkable feat, Cynthia, who emigrated to the United States from Ghana at the age of two, had her own share of challenges. Her dream of becoming a doctor had to be put on hold after she became pregnant with Jasmine when she was 23. After the birth of Jasmine, she took a different career path, working as a Certified Nursing Assistant (CNA) and then a Registered Nurse (RN). She eventually became a Family Nurse Practitioner (FNP) after earning a master’s in nursing.

A fulfilling nursing career spanning almost a decade, Cynthia was still adamant on pursuing her dream of becoming a doctor. At the age of 43, she gained admission to study medicine at UMHS in St.Kitts, graduating with a degree in Family Medicine. Jasmine, on the other hand, attended the LSU School of Medicine while her mother was also studying in the Caribbean. Both of them graduated this year.

“Medical school proved to be one of the most challenging journeys of my life. However, being able to go through this journey with my mom has been unbelievable,” Jasmine said on their blog.

Born in Kenyasi in Ghana, Cynthia told UMHS Endeavour she was inspired to become a doctor after an incident during a family trip back home.

“My mom wanted us to have a family trip back to Ghana and there was an incident where we were in the village and somebody just walked up to us and said that their child had a fever and was sick and wanted my mom and I to help. We put the child in water, trying to get the temperature down, and that’s pretty much all I remember,” she said.

“The last thing I did was ask how the child faired out and she was like ‘I don’t think the child did very well’ and I just remember being so frustrated that the mom had to come to a complete stranger to get access to health care. The only thing I knew that could change that situation was to be a physician. That drove the whole line of thought to ‘Hey, I would love to be a physician.’”

Somewhere in the interview, Jasmine also opened up on the initial challenges they faced while her mother was away in the Caribbean and how they overcame it.

“I think initially it was difficult because my mom and I have always been really close so I had to get used to the distance, we had to learn how to FaceTime and Skype each other, so we were Skyping each other every day and whenever I had struggles and she had struggles, we just had to learn to communicate from a distance,” she said.

She also revealed how they fed off each other’s energy for motivation, adding that their bond strengthened while they both studied medicine concurrently.

“I always tell people we laugh together, we study together, we cry together,” she told UMHS Endeavour. “I think medical school is one of those experiences that you don’t truly understand until you’re in it. Sometimes people struggle to find someone who relates to their struggles, so for that person to be my mom was extremely helpful.”

Cynthia, who concurs, was full of praises for her daughter and spoke about how she assisted her with her studies.

“I just think she’s smart and beautiful and it’s been such a tremendous blessing to have her because like she said, when I was studying, I struggled so much with my Step 1. I had so much help from her and from UMHS,” she said.

“I remember even when I was studying Step 2, I had taken the practice test and had actually failed the practice test that the school makes you take.  I remember Jasmine saying ‘how are you studying for this?’ So, when I told her she said, ‘Oh, no, no, no, I want you to do it this way’ so I said, ‘Jasmine, I am not you. I am in my 40s. I can’t do it like you.’ And she said ‘Mom, you taught me how to study and I know the way you think so do it this way.’ Literally what she was telling me to do was the opposite of what everyone was telling me to do. But I did it and I ended up going up over 30 some points higher than even my step 1 exam.”

The duo are set to commence work as resident doctors at LSU Health on July 1.

“It feels amazing. I feel so blessed because she has been my security blanket and my best friend and it’s amazing to know that I can drive down to a different city and not just have to Skype her. I can talk to her. I can be around her,” Cynthia said.