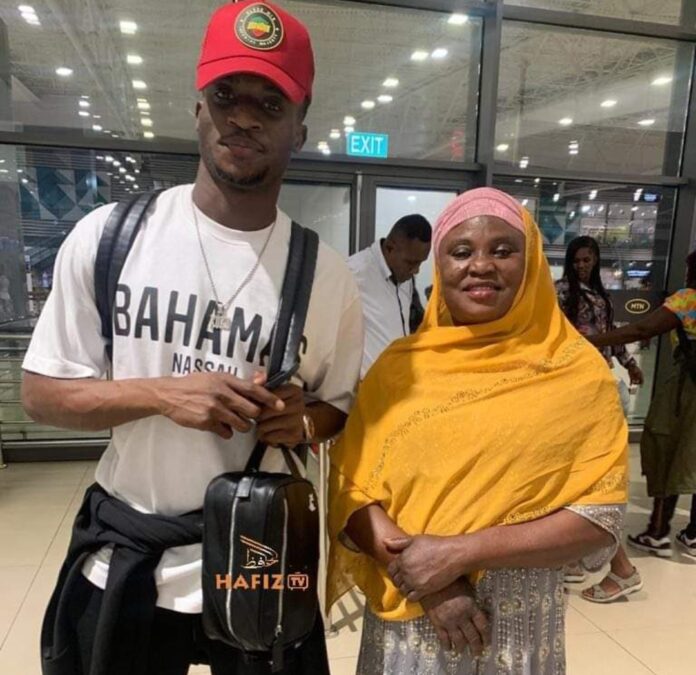 Ghana’s Black Stars star player Mohammed Kudus mother bade him farewell at the Kotoka International Airport as he returns to his team for the second round of the season.

The midfielder returns to Dutch Eredivisie giant AFC Ajax Amsterdam on Thursday morning to continue with Netherlands powerhouse in the domestic league and the Eredivisie.

He was recently honoured for his enormous contribution to the people of his area, Nima, and his explosive performance for Ghana at the 2022 FIFA World Cup tournament in Qatar.

With his area of origin, Nima dubbed as a notorious and a dangerous place to live, the young man is determined to change lives of the people there and send out a good name about his Suburb.

The AFC Ajax Amsterdam star midfielder revealed this after he was honoured for his progress in recent times while also being tasked with an ambassadorial role for the area he lived as a youngster.

In a post to appreciate the initiative, the 22-year-old said he hopes his new role will inspire the next generation from the community.

“I am overwhelmed for the kind gesture & to be an ambassador for Nima. With the social vices it’s tagged of, I found passion that I continue to harness in football.

“May this inspire the next generation to be better than us,” Kudus shared in a post on Twitter. He continued, “Nima is not just my community & roots. Nima is a Creed!!”

He scored two goals in three games at the World Cup in Qatar for Ghana’s Black Stars and was the only Ghanaian to win Man-Of-The-Match award at the 2022 FIFA World Cup tournament in Qatar.