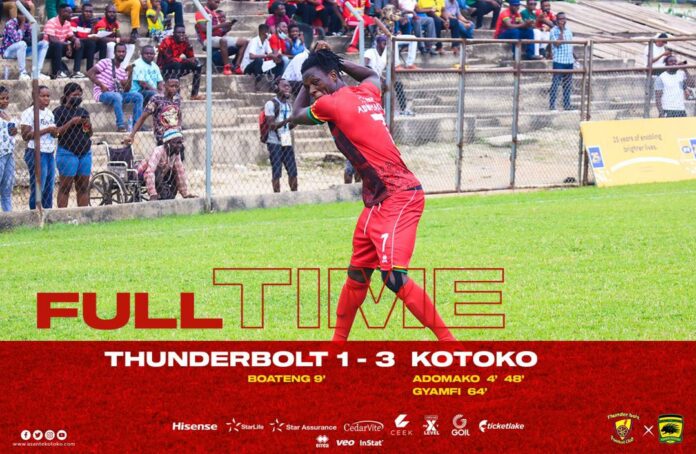 Kumasi Asante Kotoko SC brushed aside Division Two League side Thunderbolt FC in the round 32 game in Ejisu on Saturday afternoon.

The defending champions saw off a stubborn lower tier side who gave them a good run for their money throughout the end-to-end match at the Nana Okese Park.

Kotoko won the game with a 3-1 scoreline after a 1-1 stalemate at the break with both teams playing good football.

Striker Evans Adomako gave the Red and Whites outfit an early lead with a looping header following a cross from strike-partner, Solomon Sarfo Taylor on the 4th minute mark.

After the opening 10 minutes of the match, the hosts were the better side as they dominated play and created some good goal scoring chances with a beautiful football on display.

Goalkeeper and captain of Kotoko, Felix Annan made two crucial saves in the first half to keep the score level at the end of the first 45 minutes of action in Ejisu.

Three minutes after the recess, Adomako scored again to make it 2-1 to the visitors who returned from the interval with more purposeful play.

Four minutes after the hour mark, Emmanuel Gyamfi grabbed third goal of the match to put Kotoko in a somewhat comfortable lead with the top-flight side stamping their authority on the game.

The game ended 3-1 to Kotoko who book a spot in the round of 16 stage.

OPINION: The church and money laundering