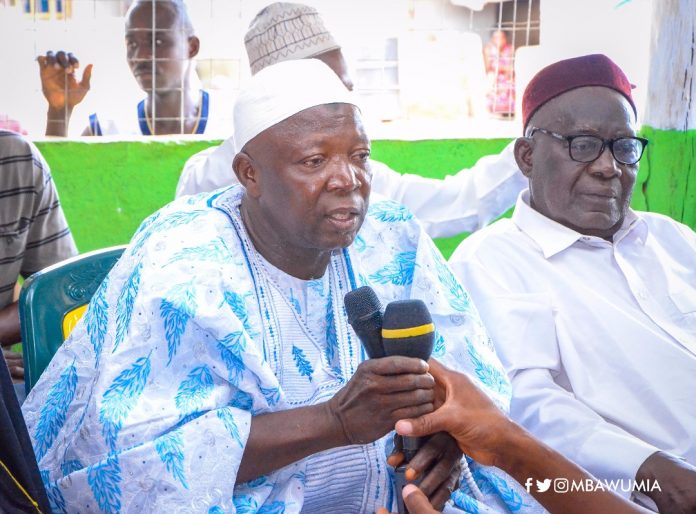 The policies, programmes and works of the NPP Government under President Nana Addo Dankwa Akufo-Addo has shown that the party cares more about the Zongo community than other parties in the country, a senior member of the Zongo community has declared.

According to Alhaji Idrissa Alla Kabo, Zongo Chief of Sampa in the Jaman North District of the Bono Region, the NPP government, in its short period in office, has proven to be more dedicated to meeting the development needs of Zongo dwellers and Muslims than previous governments, and the party is becoming attractive to members of the Zongo community.

Alhaji Kabo made the observation when the Vice President of the Republic, Alhaji Dr Mahamudu Bawumia, interacted with the Zongo community in Sampa as part of the 2019 edition of the nationwide Ramadan tour on Monday 27th May, 2019 at Sampa.

“At first we thought it was the NDC that had the Muslim community and Zongos at heart, but what the NPP government have done shows that it is the NPP that really cares about Muslims” Alhaji Kabo stated.

“In the past, Islamic education was not recognised. We also thought anyone who goes for secular education will stop being a Muslim. But today, we see that the NPP loves Islam and Muslims. We saw it under (late former Vice President) Aliu Mahama, and today under Alhaji Mahamudu Bawumia. We can see that the NPP really cares about Muslims, by their deeds”.

He urged government to support both secular and Islamic education, indicating that it would help build the human resource base of the country.
“Now that we have all seen that NPP accepts and loves Muslims, I will ask that government helps Muslims to acquire the best and highest possible knowledge, we can also contribute to Ghana’s development and who knows, one day we may have a Muslim President.

Vice President Bawumia urged the Muslims of Sampa to continue praying for the government and people of Ghana, particularly President Nana Akufo-Addo, as he works to with members of his team to take Ghana to the next level of her development.

The Vice President’s trip to Sampa formed part of his visit to the Bono region, which also included visits to, and prayers with, Muslims in Sampa, Menji and Banda Ahenkro.