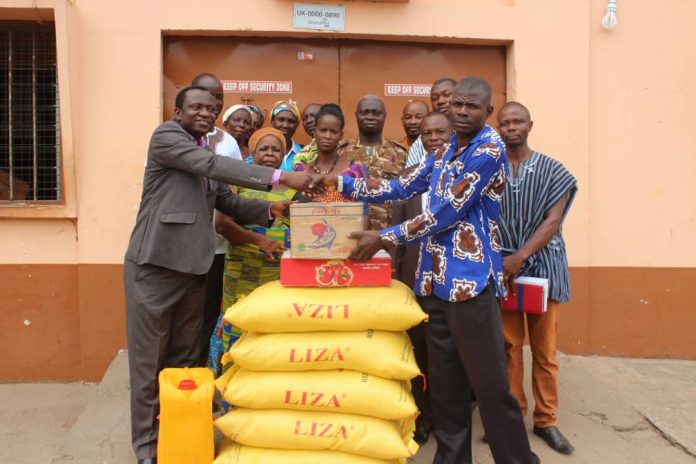 The Navrongo Assemblies of God Co-operative Credit Union has made a donation of food items including bags of rice, cartons of tomato paste and sardines and gallons of cooking oil to inmates of the Navrongo central prisons.

The donation was made on Saturday when executives of the union paid a visit to inmates at the correctional facility ahead of their 6th Annual General Meeting (AGM).

Speaking at the ceremony after the inmates treated their guests to some beautiful worship songs, the chairman of the union, Atanga Augustine, stated that the donation was the union’s way of showing love to the inmates of the prison who feel forgotten by the society.

He added that the gesture was also to compliment efforts of government in taking care of the inmates.

Mr. Atanga, who was hopeful that each of the inmates will one day walk out of the walls of the prison as free people, urged them to make use of the rehabilitation process so they can come out changed and helpful to society.

He assured that the union will continue to pay the inmates more and frequent visits.

The District Pastor of the Assembly of God Church, Reverend Abraham Ayiakwo in his address, advised the inmates to desist from acts that will distant them from God. He urged them to use the situation in which they have found themselves to strengthen their faith with God.

Reverend Ayiakwo said -“Your new dawn will come. Tell your brother that your new dawn will come. Joy comes in the morning so learn to appreciate the change in your lives and remember that joy comes in the morning. No condition is permanent. God loves everyone equally and will make each of you to have a new dawn. In your present conditions that you have found yourself in, don’t give up on yourself, use this time to get closer to God. Pray and ask him for guidance and remember to turn a new life for a new dawn”.

ASP Alhassan Nyankpani, the Public Relations Officer, who received the items on behalf of the authorities of the Prisons Service, expressed gratitude to the union for the kind gesture and assured that the donation will be used for its intended purpose.

He said the facility is faced with a number of challenges – including the lack of a workshop – making it difficult for them to achieve their main aim of “reforming and rehabilitating prisoners”.

ASP Nyankpani said the correctional facility needs support that will offer training to inmates “so they can leave the walls of the prison with vocations”.

He therefore made an appealed to the co-operative union, corporate organizations and philanthropists to come to the aid of the Navrongo Central Prisons since the government alone is not able to meet their needs.

Meanwhile, Atanga Augustine has urged all defaulters to pay up their loans to enable the union operate smoothly.

Speaking at their 6th Annual General Meeting (AGM), the chairman said though the union has made some progress in retrieving monies from defaulters, nonpayment of loans was still one of the challenges stifling the growth of the union.

He urged members to pay up their loans and announced that the union was considering various channels including court actions to retrieve monies from some defaulters who have not been forthcoming with their payments.

The chairman noted that the union has had a chunk of its money locked up in unpaid loans.
Mr. Atanga later threw more light on the benefits one could derive from being a member of the co-operative union and asked all to consider joining the union to enjoy their numerous and helpful packages.

Iddrisu Hamza, the Regional Manager of the Co-operative Credit Union-Upper East Chapter, in his address expressed his satisfaction and commended the women for their huge membership in the union.

He said women played a major role in the family and their effort to expand their businesses was something all should support.

Mr. Iddrisu concluded his short speech with the assurance that his office will always be open to persons who want to learn. He urged members to visit his office with all concerns.

CLAP GH seeks to halt sentencing of future generations into a...