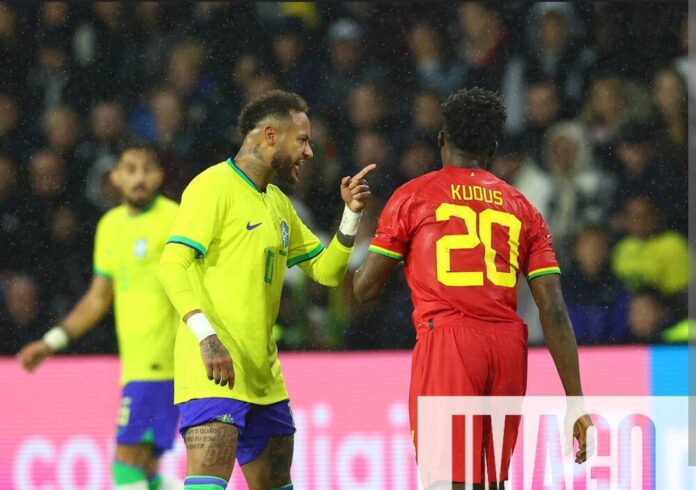 AFC Ajax Amsterdam star player Kudus Mohammed believes he’s on the same level as Brazil super star Neymar da Silva Santos Jnr as he says the PSG star is not better than him.

The 21-year-old left-footed Ghanaian young talented midfielder says the Brazilian is only a high profile player and not a better player than him.

The two players clashed several times when Ghana took on the Brazil national team in an international friendly game in France at the Stade Oceane in Le Havre, September 23 this year.

Forward Mohammed Kudus: “Neymar is not better than me. He’s just a higher profile player, that’s all… Me and Neymar, part two? I’m sure he would enjoy it”, he told the Guardian.

Kudus his been tipped by many football pundits to reach the highest level of football with his raw talent and desire to win which took him to four-time UEFA Champions League winners and Dutch giant AFC Ajax Amsterdam.

This season, he has won two Man-Of-The-Match awards, scored four goals in the group stages of the 2022-23 UEFA Champions League competition with two assists.

He’s expected to start and play a pivotal role at the 2022 FIFA World Cup tournament in Qatar for the Black Stars team who are making their fourth FIFA appearance and are looking forward to become the first Africa country to reach the last four in the tournament’s history.