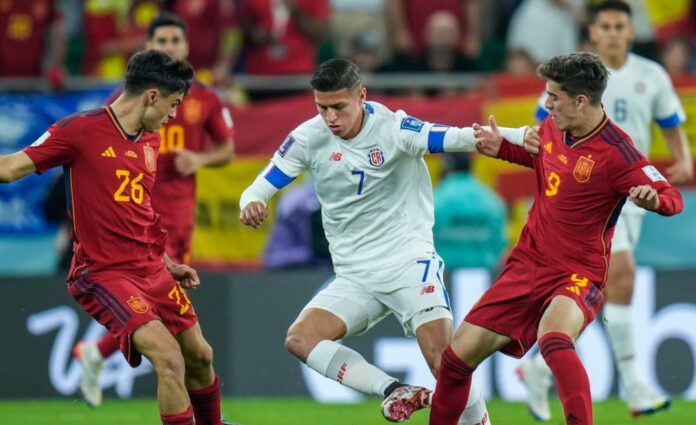 2010 FIFA World Cup winners, Spain were Unstoppable in their first 2022 FIFA World Cup tournament game against North America side in a game they recorded their biggest win ever in the history of the mundial.

The Europeans laid the marker at the right place as they marked their 2022 World Cup with a 7-0 thumping of Costa Rica and a performance that sent a message to sides backed to win the tournament.

Group E was dubbed the “group of death” ahead of the tournament, but Spain will have little fear going into their clash against Germany after despatching Costa Rica with consummate ease and achieving their biggest ever World Cup win.

Ferran Torres scored either side of halftime, once from the penalty spot and once from open play, before Gavi netted the pick of the goals and became Spain’s youngest World Cup goalscorer in the process.

Gavi was one of two teenagers selected by Spain boss Luis Enrique, and both he and Pedri were outstanding performers in a team that showed very few weaknesses as Carlos Soler and Alvaro Morata completed the scoring.

Costa Rica were hoping to maintain their strong recent defensive record after going into the game with eight clean sheets in their previous 13 internationals.

But after a disastrous opener, a tactical re-think may be required for Los Ticos coach Luis Fernando Suarez ahead of Costa Rica’s clash with Japan on Sunday.

Spain will face four-time world champions Germany in their next game at the ongoing 2022 FIFA World Cup tournament in Qatar and will seal a spot in the knockout stages should they beat Die Mannschaft on Sunday.