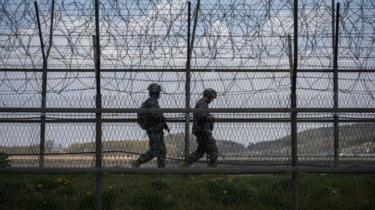 It is not clear what provoked the initial gunfire
North and South Korea have exchanged gunfire in the Demilitarised Zone (DMZ) which divides the two countries.

Seoul’s military said shots from the North hit a South Korean guard post in the central border town of Cheorwon.

It said it returned fire and delivered a warning announcement. There are no reports of injuries.

Such incidents across the world’s most heavily fortified border are rare – the last occurred in 2017. It is not clear what led the North to open fire.

Military officials in the South say there was no sign of unusual troop movements. They are trying to find out if this was an accident or deliberate.

There’s a “low possibility” that the shots fired by North Korea were intentional, according to the South Korean military. But at this stage is unclear how they’ve made that assessment.

Even if it was an accident or a miscalculation, it shows just how important it is for troops to keep level heads in the heavily fortified DMZ to ensure the situation isn’t made much worse.

If it was a more tactical decision by North Korea then that’s a very different matter.

The timing is interesting. It’s just 24 hours since the North Korean leader Kim Jong-un re-appeared after a 21-day absence. There have also been a large number of military drills in the North in recent months to improve readiness to fight an “actual war”, according to state media.

Pyongyang has sometimes used the tactic of escalate to de-escalate, using its military posturing as leverage in later negotiations.

But any sign of direct fire will be a disappointment to many in South Korea. There has been a lot of work in the last two years to ease tensions between the two countries after President Moon Jae-in met Kim Jong-un. The two sides signed a military agreement – any deliberate shots fired would breach that pact.

The last time the North opened fire on the South happened in 2017 when a North Korean soldier made a dash across the military demarcation line to defect.

The demilitarised zone (DMZ) was set up after the Korean War in 1953 in order to create a buffer zone between the two countries.

For the past two years, the government in Seoul has tried to turn the heavily fortified border into a peace zone.

Easing military tensions at the border was one of the agreements reached between the leaders of the two countries at a summit in Pyongyang in September 2018.

Mahama gets AU job to resolve crisis in Somalia

AFRICA FOR THE BALLON D’OR?: Closer Than You Think