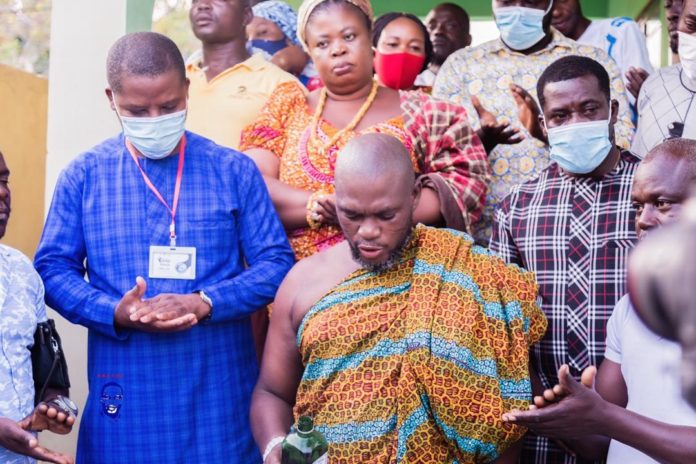 The New Patriotic Party (NPP) parliamentary candidate for Bortianor Ngleshie Amanfro, Sylvester Matthew Tetteh, has made cash donations and assorted items to the Ga Traditional Council in the Ga South Municipality towards this year’s Homowo festival.

The Homowo Festival is celebrated by the Ga tribe annually, to remind themselves of their long battle against famine and how the rains finally came to ease their burden.

The items donated include bags of rice, gallons of palm oil, bags of maize, and cash.

A Ga himself, he was accompanied by the Municipal Chief Executive for Ga South (MCE), Hon Joseph Stephen Nyarni, party executives, and other party faithful. The team paid courtesy calls on the Paramount Chief of Ngleshie Amanfro Nii Kwashie Gborlor IV, Chiefs and elders at Kokrobite, Oshiyie, Bortianor, Aplaku, and Langba and presented various items to each house to celebrate the festival with.

He said he is happy to be supporting the event and promised to use his office as CEO of the National Youth Authority to assist, nurture and develop the skills of young people in the constituency. And pledged government’s commitment to making this year’s elections peaceful.

He sought their blessings towards his campaign activities and appealed to them to intensify their prayers towards peaceful elections before, during, and after the December 7 polls.

At the gatherings, the MCE, Hon Joseph Stephen Nyarni extolled the people of Bortianor Ngleshie Amanfro for keeping the peace to present a united front for this important Festival.
Adding that a united traditional front is what evokes economic investments in any community.

The Paramount Chief for Ngleshie Amsnfro, Nii Kwashie Gborlor IV on his part appealed to the government and it’s officials to give scholarship schemes and job opportunities to their children to break the vicious cycle of semi-literacy and poverty in their communities.