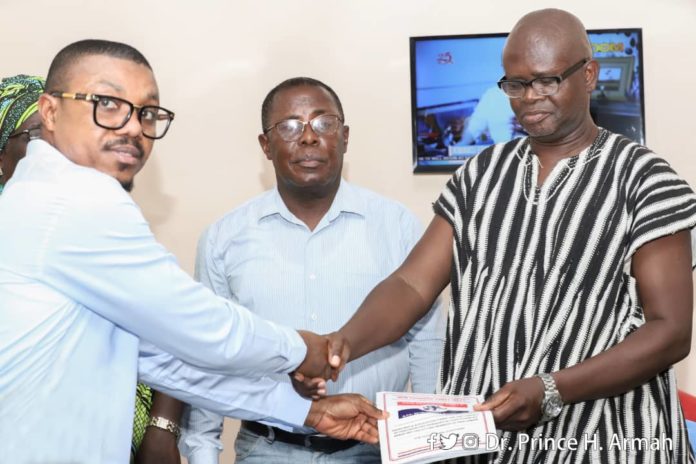 Today, 7th February 2020, Dr. Prince Hamid Armah filed his nomination forms to contest the upcoming NPP Parliamentary primaries in the Kwesimintsim Constituency. He was accompanied by some past and present constituency executives, polling station executives, party members and sympathizers as well as some friends.

This was less than 24 hours after he picked up the forms, showing his undoubted diligence, competence and readiness to lead.

The filing of nominations by Dr. Armah shows his undying patriotism and commitment to serve the people of Kwesimintsim. Voters in the constituency, particularly members of the NPP which holds the seat, appear to have lost faith in the current leadership and there have been several calls for new leadership. Dr. Armah’s entry into the race is seen by many as a ray of hope and the chance for the constituency to avail itself of his energy and competence. As a native of the constituency and a party member for many years, he understands the plight and concerns of the people and the activists who make the party tick. Around the constituency, his frequent acts of public and private generosity have endeared him to young and old, who see him as someone who hasn’t forgotten where he came from and is determined to give back to the community.

Dr. Armah, who is currently the Executive Secretary of the National Council for Curriculum and Assessment, as well as a lecturer at the University of Education, Winneba, has committed himself to a campaign based on issues. As a known public policy expert, he intends to use the campaign period to offer in detail, his vision and strategies to boost the quality of life in the community. His agenda rests on the three main pillars of skills development, job creation and accelerated social infrastructure.
Dr. Armah has pledged to do his very best to unify the constituency party. Affable and accommodating, he has repeatedly urged his supporters to focus on the issues and not rise to the bait even when others seek to attack his character, as has sadly been the case on several occasions. On social media and other avenues, some opponents have resorted to insults and lies in a futile attempt to derail his momentum. He however insists that the party will need everyone to win resoundingly in the December general elections and so the primary campaign must unify, rather than divide the party.

It must be noted that the spirit of contest is very natural to the NPP and Dr. Armah’s bid is in line with the party’s rules as well as tradition. It was thus not in any one’s gift to allow him to contest and it is certainly no credit to anyone, as has been insinuated in some quarters, that he was “allowed” to pick his forms. Indeed, there were some machinations to prevent him, which thankfully came to nought due to the efforts of some true patriots in the constituency who insisted that the right thing be done.

Dr. Armah is a leader who is first a unifier, a pacesetter and agent of development, qualities that are necessary to propel Kwesimintsim’s development. Let all who seek for a refined leadership that inspires hope join the Dr. Armah’s train for a better Kwesimintsim. He has the exposure, connections and track record of being an achiever. And that is exactly what the people of Kwesimintsim are looking for now. With his record as an accomplished educationist and researcher, policy expert and management consultant, he has what it takes to harness the vast potentials here and leverage it for the community’s development. He is indeed the man of the moment, and all who desire progress here in Kwesimintsim should arise and join this movement to make the dream of change a reality in Kwesimintsim.

Politics remains a battle of ideas not insults. Dr. Amah has shown that he is ready to do battle on the arena of ideas. I invite all who seek to contest and their supported to eschew abuse and personal attacks and meet him there. Let us compare ideas and track records and choose the best man or woman for Kwesimintsim. That is the only way we will all win.

‘SONGS OF FREEDOM’: When Defiance Triumphs Over Doubt

GHANA PREMIER LEAGUE WEEK 10: What We Learnt This Week (WWLTW)