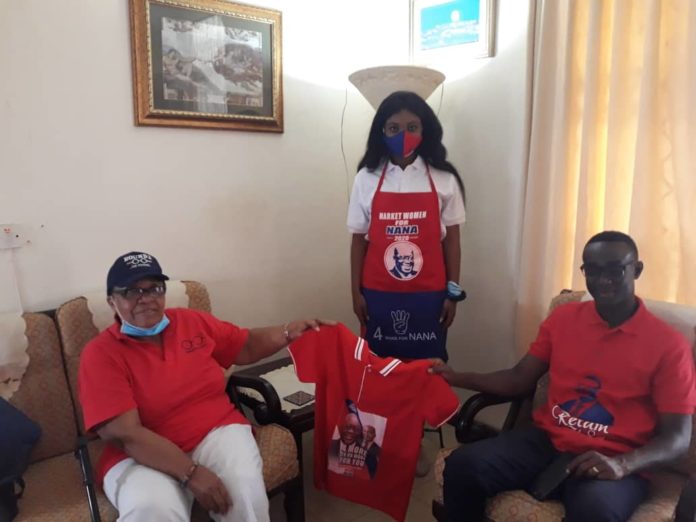 As the 2020 presidential and parliamentary elections draw closer, an influential member of the New Patriotic Party (NPP), Mrs. Rosamond Dsane-Selby, has donated a consignment of T-Shirts and aprons to the  party’s La Dadekotopon Parliamentary candidate.

Being the widow of one of the founding members of the Dombo-Busia-Danquah tradition, the late Dr. Kofi Dsane-Selby, she presented the most patronized items to the NPP’s Parliamentary hopeful, Joseph Gerald Tetteh Nyanyofio, on Monday, 26 October, 2020.

This was when the Parliamentary Candidate led a delegation to pay a   a courtesy call on her at her private residence in Accra.

She explained that the donation was in memory of her late husband who is eulogized for his immeasurable contribution to the current NPP’s accomplishments.

She promised to continue contributing her widow’s mite towards improving the party’s electoral fortunes in the area and beyond.

Nyanyofio is gunning to retain the seat on the NPP’s ticket at the 2020 Parliamentary polls.

If he wins, he will succeed Vincent Sowah Odotei, the incumbent Member of Parliament who won the seat on the NPP’s ticket at the 2016 polls.