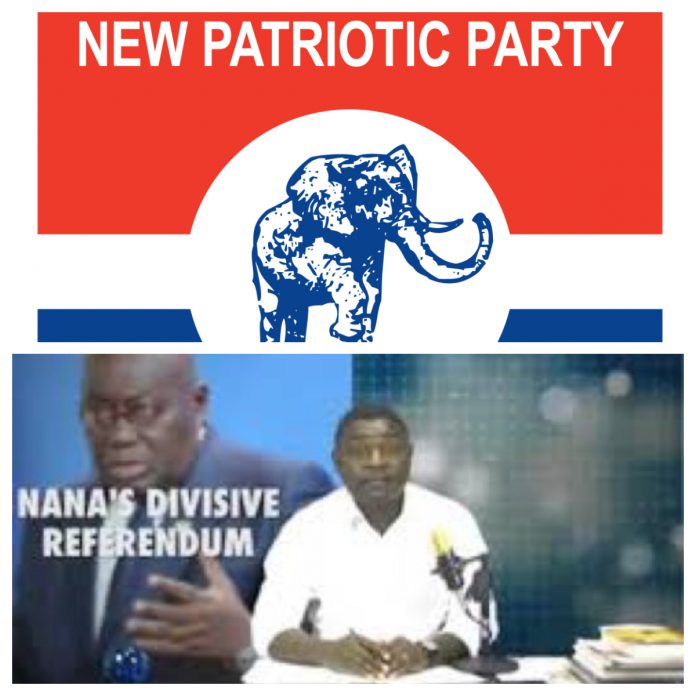 We are told that when digging a hole for someone to fall in, we must be careful not to make it too deep…

Last week a most unusual piece of correspondence was laid bare for the entire world to make sense of: A Ghanaian political party called New Patriotic Party (NPP) had written to the New York Times to complain about the husband of one of the newspaper’s employees.

The husband, called Kevin Ekow Baidoo Taylor does a weekly broadcast called “With All Due Respect”. It is a hard-hitting, critique of happenings in Ghana, the main target being Nana Addo-Dankwah Akufo-Addo, other elected and appointed NPP officials and the party itself. It is self-criticism as he also belongs to the party. But what could have gone so terribly wrong as to make them take the rather desperate route of writing to the NYT to complain not about an offending news report or article but the husband of an employee?

Nana Addo-Danquah Akufo-Addo and his sidekick Mahmoudu Bawumiyah from 2015 when they were running for the presidency, provided inspiration to NPP communicators’ daily barrage of vitriol and unsubstantiated accusations against a sitting president. The worst were their paid hirelings, the “serial callers”, darting about from one radio and TV station to the other, with foul language and lies. Senior members of the party, like Ursula Owusu, now a cabinet minister, Gabby Otchere Darko, a right hand man of Nana Akufo-Addo, Kennedy Agyepong, an MP, the Ashanti Region Chairman of the NPP, Yaw Buabeng Asamoah, the Communications Direct of the NPP (author of the NYT letter) and even a “small girl” like Samira, Mahmoudu Bawumiyah’s wife, and a whole army of them, would screech from roof tops lambasting John Dramani Mahama (recently enskinned Kayite Wura), never seeing any good in him, when his good works were there in the glare of reality for all to see…His party, the NDC had no New York Times to run to and bleat for protection.

The media amplified the invectives with their versions parading as news reporting. Indeed the media infamously helped things along with an acquiescent civil society made up of so called Civil Society Organizations (CSO), some traditional rulers and some so called men and women of God actually being complicit in the charade against sitting President Mahama.

The tables turned after the elections of 2016 when Nana Akufo-Addo and the NPP were inaugurated into office and started off as if the election results that brought them into office meant a mandate for impunity and arrogance. It was what midwifed Kevin Taylor (one of their own) into being. Holding the mirror back at them, showed a reflection they did not like at all…

Writing to the New York Times to grouse and whinge about one of their own is as pitiful as it is embarrassing. To put it another way: On receipt of the NPP complaint, did they expect the NYT to call Mrs. Taylor and say to her: “Your husband is insulting the Ghana head of state, we warn you to tell him to desist or you lose your job with us”?

It does not work that way in the US, the country that prides itself as the bastion of freedom of expression and independence of the media. They regard those freedoms as inviolable and would no doubt feel highly insulted by a bourgeoning African dictatorship trying to push them around on such an issue. The NPP’s letter was therefore most naïve, ignorant and arrogant. Taking that angle, more or less, was proving Kevin Taylor’s point. The communication handlers of the NPP must know that the NYT is not simply a newspaper publisher but an icon of US media excellence and independence. They do not kowtow to the diktat of any US politician, be it President, Governor, Senator, or Congress person – why should they kowtow to a developing African dictator?!

The NYT may out of politeness respond with a word or two about freedom of expression and independence of the media, but in all probability will throw the letter into the rubbish bin as a TW – time waster!

When Nana Addo-Dankwa Akufo-Addo and the NPP were digging the hole for the Kayite Wura John Dramani Mahama, little did they expect that it would be widened and deepened by one of their own for them to fall in…They should claw their way out by doing the right thing – as pointed out to them by Kevin Taylor in his “With All Due Respect”. For starters they should stop the media harassment and for example unban Radio Gold, one of the few outlets for differing opinions in Ghana.

As I was doing the concluding paragraph of this opinion piece I received a WhatsApp post showing one Ernest Owusu Bempah of the NPP, not satisfied with his party’s complaint to the NYT, dig viciously into Kayite Wura John Dramani Mahama. (In explanation: Kayite Wura means the Owner or Chief of Patience or Tolerance conferred on him only last week by a Traditional Area in Bono East Region).

As a response to his party member Kevin Taylor, Mr. Owusu Bempah rather turned on the Kayite Wura and the language used was like a pit bull terrier or Rottweiler tearing into a victim! Whew! The NPP, after all, does not need any help from the NYT!!!

For the avoidance of doubt, I am sending this opinion piece to Laurie Goodstein, Africa Editor of the NYT.