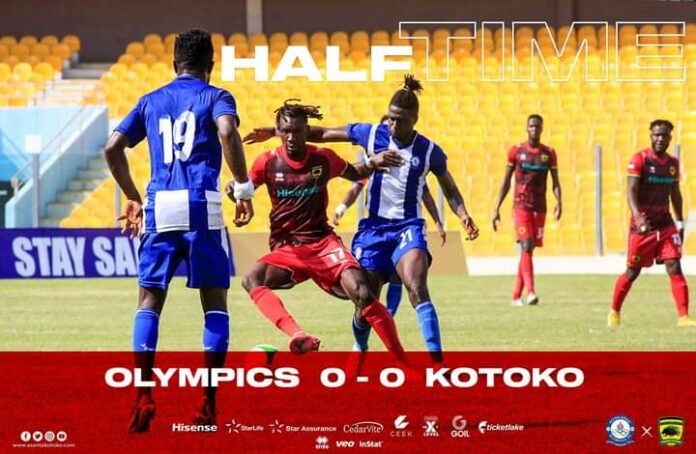 Accra Great Olympics and Asante Kotoko played out a goalless stalemate in the top of the table clash on Friday at the Accra Sports Stadium.

The two sides provided a good football game in a match-day 20 encounter of the 2020/21 Ghana Premier League.

The top of the table cash lived up to expectations in the first half as it provided end to end active one but the same cannot be said of the second half as the tenacity of the game dropped.

The Porcupine Warriors made their intentions clear at the early stages of the game but could not make the most of their first five minutes domination count.

Patrick Asmah was fouled close to the Olympic’s box as he launched his head to a cross from Emmanuel Sarkodie but Imoro’s resulting kick went off target.

Kotoko came close again but Andy Kumi’s cross was restricted beyond the byline.

Olympics ha a foul midway into the Kotoko half, but Gladson Awako sent a whisker off the crossbar.

Kwame Joshua of Olympics initiated another attack, tearing off dangerously at the right-wing of Kotoko but couldn’t connect a shot into the box as his ef rt was blocked to safety.

The referee brought the first half to an end as a couple of half-chan s came from both sides with the goalkeepers not having much to deal with.

After recess, James Akaminko was presented with an opportunity to give Olympics e lead with the first chance of the half, but his shot, from the edge of the box, went wide.

Godfred Asiamah announced his presence after replacing Emmanuel Sarkofie as he skewed a cross towards Andy Kumi inside the box, but the ll was intercepted by an Olympics defender, who cleared their lines with a half volley.

Both sides could not create any decent chances as the referee blew his whistle to bring proceedings to an end.