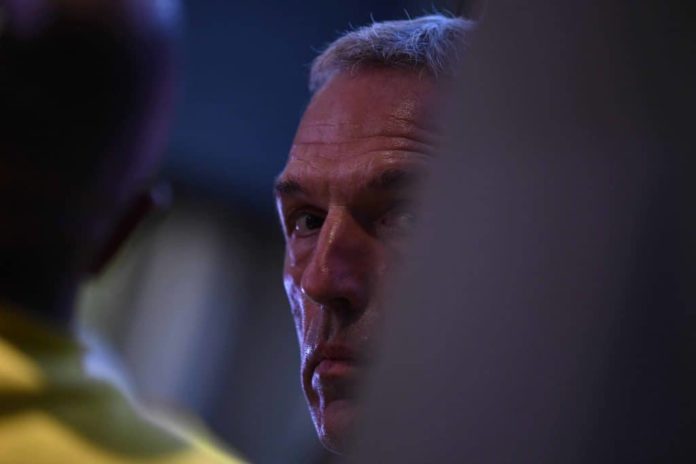 The German has had a long managerial career, starting when aged only 29. He’s now 61, and his presence has been felt on three continents. In Africa, though, he has found the tightest embrace outside his homeland, and he could well consider himself an expert in these parts. South Africa, in particular, has been warmly welcoming. There he found love, marrying Bronwyn, a kinesiologist, in 2010. And there he has spent all but two of the last 15 years of his working life, managing five clubs.

Kaizer Chiefs, undoubtedly, are the biggest of the lot. It’s been 21 months since Middendorp took charge of the Amakhosi for a second spell, 13 years after he first took charge at Naturena. News of his return didn’t excite many Chiefs fans, although their team had only picked four wins and 18 points from the first 14 games of the 2018/19 Absa Premiership season. Exactly a year later, though, Chiefs were in a much better place: top of the table, seven points clear, and favourites for a first league triumph in five seasons, albeit with much of the campaign to go.

With just a game to end the season, Chiefs are still in the lead, but it’s slender now, and the company atop the log isn’t so exclusive anymore. Mamelodi Sundowns are close — too close, in fact, for Chiefs’ comfort. Pitso Mosimane’s team has drawn level on points, trailing only on goal difference and total goals scored. The bigger advantage, though, might just lie with them.

Sundowns have won the title thrice since Chiefs last did, including the last two, and have not finished a season out of the top two in that period. And, unlike Chiefs, the success of Sundowns’ season doesn’t hinge on the outcome of Saturday’s showdown; the 2016 African champions could still sign off with a flourish, should they beat Bloemfontein Celtic in the Nedbank Cup final next week.

They would play under less pressure, but even if the heat gets turned up a notch, Sundowns wouldn’t find it unbearable, as they are no strangers to a final-day thriller: it’s how Mosimane won his first league title for the Tshwane outfit, over Chiefs, remember; also how he won his fourth and most recent, at the expense of Orlando Pirates, the other giant from Soweto. The Brazilians would feel inspired for this duel, then, and especially because of how they’ve dragged themselves into it, though distracted by continental action.

“We’ve closed the 13-point gap, and that’s what I’m proud of – to close a 13-point gap with the games in hand, whilst we were in Morocco and Cairo – playing Al Ahly and all that,” Mosimane told the media.

Chiefs’ slump, defined by just two wins in seven games since the championship’s August return from a coronavirus-induced break, aided Sundowns’ recovery greatly. From a position where they could have wrapped the title up with some ease, Chiefs find themselves in a situation so tense and dicey. It’s still all in their hands, though, and Middendorp knows that.

“It’s about points now,” he stated after Wednesday’s narrow victory over Chippa United. “It’s about winning. I’m fully aware about that.”

Chiefs come up against Baroka FC, a team no stronger than Black Leopards, Sundowns’ own opponents. Neither side is safe, and they wouldn’t lack motivation to throw all they can muster at these heavyweights, even potentially having a say in which way the title swings. Middendorp, saying a prayer and wishing on a star, would hope it all works in his favour.

He needs it, in fact, more than his team does. This league title, in a season when he became the first to win three consecutive Coach of the Month awards, would be the ultimate, long-awaited validation of his credentials. Breaking Sundowns’ two-year hold on the prize, and becoming the first expatriate — and Chiefs boss — since Stuart Baxter (2015) to be crowned champion, should fully elevate Middendorp into the bracket of elite managers in the realm of South African football.

Middendorp hasn’t had too much silverware to celebrate in his career, but winning cup finals — one in Ghana (with Asante Kotoko, where he began his African adventures and achieved something approaching cult status), and a couple in his earlier stint with Chiefs — may just be a specialty, if he has any. Mosimane has declared it one, anyway, and Middendorp will be sucked right into it tomorrow.

How, really, could he sleep tonight?