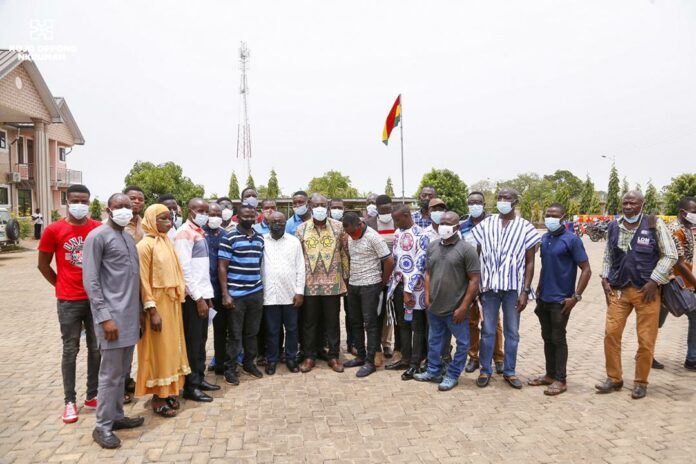 Minister for Information, Kojo Oppong Nkrumah has emphasized government commitment to support the work of journalists in Ghana.

The Minister said this on Wednesday May 5, 2021, on a three-day tour of the North East, Upper East, Northern, Savannah and Upper West Regions to engage with journalists. The tour forms part of government’s efforts in taking inputs from relevant stakeholders amid ongoing discussions to restructure the country’s media landscape and provide media personnel with the needed support in their day-to-day activities.

Part of the support mechanism the Minister noted is the provision of the Office for the Coordinated Mechanism on the Safety of Journalists to investigate reported attacks on journalists, validate same and take the necessary steps to seek legal redress.

“As we have just finished with the commemoration of the World Press Freedom Day, you may have noticed on the front pages of today’s newspapers that yesterday I opened the Office for the Coordinated Mechanism on the Safety of Journalists here in Ghana.

“That office is just one additional layer to the many other layers of work that the government of Ghana and specifically the Akufo-Addo administration have been embarking on to deepen media freedoms and the freedoms of expression,” he said.

He also admonished town folks to strictly adhere to the COVID-19 preventive etiquettes stressing that though our active cases has stabilized, now is the time we need to religiously wear our face masks and wash our hands intermittently to get rid of the virus entirely from the country.

Beginning from the North East Region, the Minister visited the Regional Coordinating Council (RCC) where he interacted with hosts of journalists to acquaint himself with the challenges they face particularly in the region proffering solutions to the myriad of challenges before paying a courtesy call to the Nayiri Palace.

Regional Minister Yadina Zakaria in his remarks expressed gratitude to the Minister for the engagement. He assured that the second term of President Akufo-Addo’s tenure will bring more development projects that will improve on the living standards of the people in the region.

The Overlord of the Mamprugu Traditional Area, Nayiri Nabohagu Abdulai Mahami Sheriga on his part thanked the Minister for his visit. He took stock of ongoing developmental projects in the region describing it as “unprecedented” expressing his delight at how the current administration has brought development closer to locals.