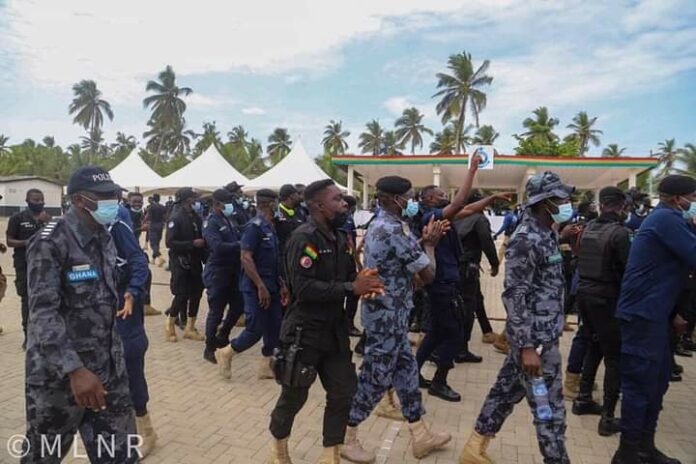 Over 200 personnel from the Ghana Police Service have been deployed to mining sites across the country to enforce the recently announced directives on artisanal mining as well as ward off illegal miners.

The deployment comes on the back of a similar deployment of officers from the Ghana Armed Forces and it isn’t clear whether the police would replace the military.

Speaking at an event to dispatch the officers, Deputy Minister-designate for Mines and Natural Resources, George Mireku Duker urged them not to allow themselves to be compromised with financial inducements as this will ruin the good intentions of government.

“They have received training and must comply on voluntary principles on security and human rights. The temptations of bribery, greed for money will try to sway you off but I urge you to put on the armour of patriotism, selflessness and integrity in the discharge of your duties,” he cautioned.

“So, the sector ministry, the IGP and the Ghana chamber of Mines decided, collectively, that we would replace the military with the police. The military also has certain coordinated assignments to do and that’s why we have assigned this to the police. So, the military are also doing something different or something similar to support the same effort,” he explained.

The deployed police personnel have undergone a two-week pre-deployment training to shore up their expertise in dealing with mining related issues.

Chief Executive Officer of the Ghana Chamber of Mines, Sulemana Korney called for a permanent police unit for the mining sector as the mining companies and communities continue to struggle with robberies and life-threatening crimes.

“There are encroachments that translate into explosive magazines and all of that. Sometimes, they even go to the gold room where they really go to steal gold. This is pure theft! So, it’s a major issue if you don’t have the requisite security apparatus to deal with such challenges,” stated.

The Ghana Police service is upbeat that the police personnel that are being deployed would discharge their duties professionally and ethically.